Caltrans pays tribute to its fallen

For the 31st consecutive year, the Caltrans Workers Memorial gives a somber salute to those who have died on the job

Pull on up and re-energize, free of charge

Throughout Districts 6 and 7, charging stations at rest areas are making long trips easier for EV motorists

Coastal highway is a gem among gems in the Golden State

There's scenery in them thar foothills of the Western Sierra

Road trippin': Travel back (figuratively, anyway) to the Gold Rush on State Route 49

Thanks to Caltrans, motorists can get over it

Kramer Junction, where State Route 58 crosses U.S. Highway 395, used to be a desert bottleneck. No more!

We celebrate our diversity and inclusivity

I would like to take this opportunity to revisit two very important celebrations we recently engaged in: Black History Month (BHM) in February, and Women’s History Month (WHM) in March. The spirit of acceptance and inclusivity that these celebrations spotlight is something we want to embrace year-round.

Caltrans on April 29 honored the lives of 189 highway workers who have died keeping others safe during its 31st annual memorial on the West steps of the California State Capitol. This year’s tribute did not include a public event due to the COVID-19 pandemic. To remember the fallen workers who built and maintained the state’s transportation system, Caltrans placed 189 orange traffic cones in a diamond “caution sign” configuration, each bearing the name of a worker lost since 1921.

The August Complex arose out of approximately 38 lightning fires sparked Aug. 16 and 17, 2020, burning in portions of Glenn, Lake, Mendocino, Shasta, Tehama and Trinity counties. By Sept. 11, the largest fires in the complex, including the Doe Fire, the Elkhorn Fire and the Hopkins Fire, had merged together to create the largest recorded fire in state history.

At the junction of efficiency and competence

Caltrans District 8 completed the Kramer Junction project in December 2020 on State Route 58 (SR-58) at the junction of U.S. Route 395 (Route 395). The project was made possible and funded with Senate Bill 1 (SB 1). The $242 million project realigned and widened a 13.3-mile segment of SR-58 from 0.4 miles west of the Kern County/San Bernardino County line to 7.5 miles east of Kramer Junction.

Electric vehicle (EV) drivers now have more fast-charging options along state highways in Central California — including at the popular Tejon Pass Rest Area near the Los Angeles/Kern County line — with the installation of 22 new EV fast chargers at nine locations by the Caltrans.

Don’t miss your chance to win money, recognition and a signed certificate from the director of Caltrans! With the launch of the Safety Programs Recognition Awards, the Division of Safety Programs will reward the safety and innovative work done by all Caltrans employees, occurring between Jan. 1, 2020, and April 30, 2021.

“Find out what your wife wants and get it for her.” That’s Charlie Moss’s advice to others who want a lasting and happy marriage like his with Doris. The prominent Mount Shasta couple will celebrate their 70th wedding anniversary on Wednesday, March 17. Charlie, a retired Caltrans engineer, and Doris, who founded Doris Moss Realty in 1970 have never had a “real argument,” Doris said.

The California Transportation Foundation (CTF) has announced this year’s winners for the four most prestigious awards in transportation: Person of the Year, Caltrans Director Toks Omishakin; Elected Official of the Year, Hon. John Fasana; Organization of the Year, Bay Area Toll Authority; and Project of the Year, Gerald Desmond Bridge.

Let's take it in the arm, Caltrans!

‘A thank you for the great job you do'

"So many times we are too quick to criticize and don’t spend enough time acknowledging jobs well done. So, just a quick thank you for the great job you do on maintaining and improving our highway system here in California."

Improve how your face mask protects you

Not all face masks are created equal. The CDC has issued recommendations based on multiple recent studies that show how layering a cloth face covering can offer additional protection. The effectiveness of cloth and surgical masks can be improved by verifying they are well fitted to the contours of the face to prevent leakage of air around the masks’ edges.

A list of Caltrans employees who celebrated 25 or 40 years of service, or who received superior accomplishment awards, in December (2020), January and February.

A list of Caltrans employees who retired in December (2020), January and February.

Sergio Acevez, chief of the Division of Maintenance

Dina A. El-Tawansy began her new role as District 4’s director on March 4. Dina has 23 years of service with Caltrans and her leadership experience spans three districts and multiple divisions. Her most recent assignment was as District 4’s acting director. Previously, she served as chief deputy district director for the Bay Area district.

Velessata Kelley, chief of staff to the director

Velessata Kelley began serving as chief of staff to Caltrans Director Toks Omishakin on May 3. She has served 31 years in the state of California, and joined Caltrans in 2013 after working for the Employment Development Department and the California Public Employees Retirement System.

Rizwan Tavir is the new assistant chief engineer for Project Delivery. As a member of the Project Delivery leadership team, he will coordinate activities and provide technical support to the deputy director of Project Delivery, Michael Keever, and to the division chiefs in Project Delivery on complex issues, policy matters and projects of critical.

Longtime Caltrans employee James William Benbrook, 84, of Lee’s Summit, passed away Jan. 21. He was 84. Jim was born on July 30, 1936, in Garfield, Arkansas, the third of four children born to John and Jewell (Ricketts) Benbrook. Jim grew up in Lodi, and was a graduate of Sacramento City College. Following graduation, he enlisted in the U.S. Army where he served from 1958 until 1961 until his honorable discharge.

Longtime Caltrans employee Rolland John “Brownie” Brown was born in 1937 Salinas to John W. and Wilhelmina Brown. He died in late 2020. He graduated from Palma High School in 1956 and attended Hartnell College. He began his lifelong career with Caltrans and married his high school sweetheart Linda M. Brown in 1957. Shortly after starting his career with Caltrans, he received a transfer and moved his family to Atascadero.

Retired Caltrans District 3 construction worker Joseph Aramat Chumo died on March 13 after a long battle with diabetes and lung cancer. Joseph was born in 1947 in the Kenyan town of Kapulung’o, Nakuru County, and later moved to Kabimoi, Eldama Ravine Sub-county, Baringo County. He was the sixth child of Kapterit Chumo and Tabartai Kimoi Chumo (Chepokisira).

Retired Caltrans worker Karen Dawn Sanchez, age 65, of Oceanside passed away on Dec. 27, 2020. Karen was born to Joe Dalton Thompson and Daisy Lillith Krider on Dec. 15, 1955, in Oceanside. Raised in Oceanside by John M. and Daisy Kozak, Karen enlisted in the Army after high school. In 1978 she welcomed her daughter Jessica Bee Taylor.

After a series of health issues, Glenn H. Fraley, 66, passed away at home on March 24 surrounded by his wife and children. He worked as a heavy equipment mechanic for DeRaad Warehouse, City of Lemoore, and Caltrans before having to medically retire from Calrrans in 2011.

On March 8, Charles Larry Lagle, loving husband, father and grandfather, passed away at the age of 80. Larry was born on Aug. 8, 1940, in Tucson, Arizona, and was raised in the small Arizona town of Bowie. He served in the Marines from 1960-1970, including time as a reserve. Larry also worked for 15 years for Caltrans and retired in 2003.

Corinna "Suzie" Maskovich, 62, loving wife, mother, sister and friend, earned her angel wings on Dec. 30, 2020, after a month-long battle with COVID-19. Suzie began her career working for Bank of America, where she met her soon to be husband of 41 years. She then worked for Caltrans, first in the Accounting Office and then for the Office of Maintenance, where she retired after 30 years of service.

Retired Caltrans worker Mitsuo "Mits" Ogata passed away peacefully on April 18 in Sacramento. Mitsuo was born in the Tule Lake internment camp. After the war, his family settled in Lodi, where he attended Tokay High School. He lived most of his adult life in Sacramento, working over 40 years for the state of California as a branch manager all while being legally blind.

Retired Caltrans employee Frederick Stewart died on Dec. 23, 2020. He was born on Sept. 29, 1935, in Shoffner, Arkansas, to Faye and Fred Stewart. Fred grew up in Arkansas and helped his family work the farm until they migrated to California in the mid-1950s after he graduated from Conway High School, where he lettered in basketball, baseball and football.

A salute to our colleagues who died on the job 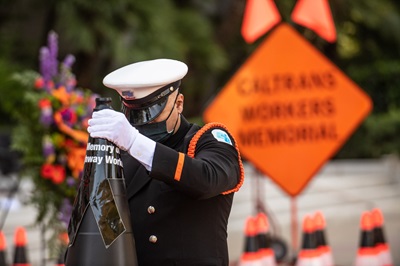 Every spring, Caltrans pays tribute to those departmental employees who have lost their lives on the job in the past 100 years. The 31st annual Caltrans Workers Memorial was conducted on the West steps of the Capitol building in Sacramento on April 29. Due to the pandemic, for the second year in a row the ceremony was private and livestreamed. See more photos from the event in this gallery.

The views from Caltrans: District 9 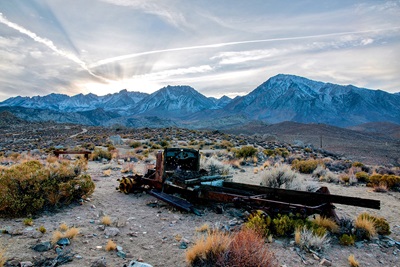 CT News is excited to launch a photographic exploration of Caltrans' 12 regional districts, beginning with District 9. The lightly populated region extends north of Los Angeles County all the way to Alpine County, encompassing along the way Death Valley National Park, the Eastern Sierra communities of Ridgecrest and Bishop, Mammoth Mountain wintertime resort and Devil's Postpile National Monument, the dramatic eastern portion of Tioga Pass, the striking beauty of Mono Lake, and much more.

Just another perfect day along the North Coast 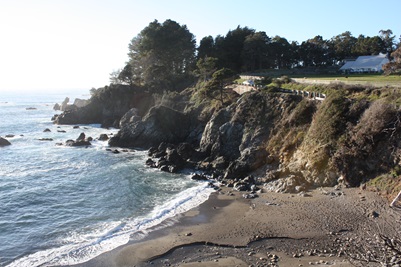 Although California's Central Coast is what most tourists think of when they are planning to drive (or bicycle -- yikes!) down State Route 1, the fabled highway has plenty to offer above San Francisco, too. The scenery is arguably just as spectacular, and for the most part there is less traffic. CT News takes a spin from where SR-1 begins on down to just south of Bodega Bay.

Following in the footsteps of the (18)49ers 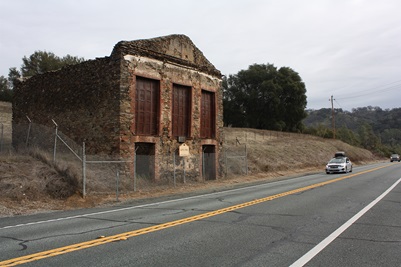 It's not exactly traveling back in time, but it's something akin to it when motorists steer their vehicles along State Route 49. This generally low-tech and quaint portion of our immense state harks back to the Gold Rush, and gives visitors a sense of where and how California debuted as a force to be reckoned with.

Looping around a lovely lake 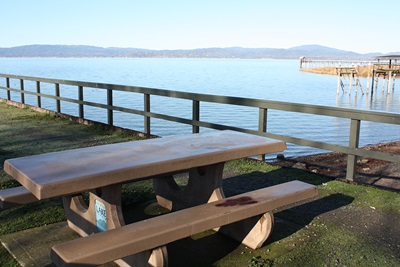 Have you been to Lucerne, or Nice? And did you know you could drive to those places via the California state highway system? Yes indeed, you don't have to travel to Europe to visit those two towns. They're placed atop Clear Lake in Northern California. CT News drove through them on its way to U.S. Highway 101 and more points north.