Saying goodbye to a legend in state transportation
Heinz Heckeroth was in many ways the right person, at the right time, in the right place
Congestion relief
Caltrans prescribes a left-turn lane in Murphys, and State Route 4 is back in the flow
The glorious midsection of California's signature roadway
There's no highway in the world quite like State Route 1, which CT News continues to follow down the coast

Ceremonies spotlight our emphasis on safety

As always, Caltrans has safety as its top priority. We shine a spotlight on safety every spring with our Workers Memorial ceremonies conducted in all of our 12 districts. Here at Headquarters, we are looking forward once again to being able to walk across N Street to join the statewide Workers Memorial on the west steps of the Capitol at 11 a.m. on April 28.

Since 1921, 189 Caltrans employees, tragically, have been killed on the job. Each year, Caltrans honors its fallen employees at the statewide Workers Memorial on the west steps of the State Capitol. Family members, co-workers, friends, and the general public are invited to attend the memorial, which takes place this year at 11 a.m. on April 28.

Heinz Heckeroth, one of the giants in California’s transportation sector during the second half of the 20th century, died on March 6 in Sacramento. He was 96. Heinz’s remarkable career was distinguished by its variety, accomplishments and timing. During his three decades with what is now called the California Department of Transportation, Heinz was the lead engineer of a monumental Los Angeles freeway interchange in the early 1960s, helped write legislation that transformed the Division of Highways into Caltrans in the 1970s, was District 7 director during the L.A. Olympics and afterward served as chief deputy director of the department in the 1980s.

Career prospects are not abundant in the tiny mountain community of Coleville in the Antelope Valley of northern Mono County. Christopher Baker, Cody Collins, Josh Dixon and Matt Hussman – “the Coleville 4” – grew up believing they would be ranchers or take other occupations in their hardscrabble hometown. But in time, each found his way to Caltrans.

In addition to hosting a very successful dump day event with nearly 100 vehicles, District 12’s fantastic maintenance team helped reunite with their owners two chocolate labs – a momma and her puppy – who had gotten loose on the 91 freeway. Working together, Juan and the CHP officers were able to catch the dogs.

Driving along State Route 108 in Tuolumne County presents an interesting contrast between the past and present. Near Sonora, many trees, and swaths of ground along the highway still show burn scars from last year’s Washington Fire Dangerous. Caltrans District 10 is doing its part to mitigate their potential from starting and the damage they may cause.

To a casual observer, the portion of State Route 4 between Pennsylvania Gulch Road and Lawrence Street/Main Street in the town of Murphys might look innocuous these days. But ask a local and they will tell you how pleased they are that Caltrans District 10 recently completed the Murphys Center Left-Turn Lane Project.

”I wanted to write to inform you of your outstanding employee, Bradley Larson. My husband, 80-year-old mother and I were forced to drive home to Reno, Nevada, from a Christmas celebration in Los Angeles (due to COVID and airport mayhem). As the weather progressively turned to snow and ice, after what felt like a perilous drive in our inadequate rental car, we got stuck in Lee Vining on Christmas night."

Tips on how to banish burnout

If you’re feeling stress, anxiety, and burnout stemming from the disruptions caused by the pandemic, you’re not alone. Surveys show a rise in burnout among all age groups, especially among younger adults. People experiencing burnout often feel mentally and physically exhausted, unmotivated at their jobs, and disconnected from others. Other symptoms of burnout include insomnia, irritability, anxiety, and a sense of hopelessness and negativity.

A list of Caltrans employees who celebrated 25 or 40 years of service, or who received superior accomplishment awards, in February and March.

A list of Caltrans employees who retired in February and March.

Mariana Chavez-Brooks is the Division of Business Operations’ new assistant division chief (Administrative Services). Mariana has more than 17 years of state service, all which have been in the Department of Transportation. Mariana started her career in the Division of Engineering Services and has since worked in Civil Rights, Project Management, Division of Local Assistance, and Traffic Operations.

Lee Drake, a television specialist at Headquarters, died on Feb. 20. During his five-plus years with the department, Lee produced numerous videos highlighting Caltrans' achievements. These included episodes of the popular Caltrans News Flash series, another series of videos showcasing important Senate Bill 1 projects across the state, and a video series on the Clean California program.

Retired Caltrans survey crew leader and bridge designer Frank N. Lauck died March 25. After receiving his degree from Chico State College, Frank obtained employment with the California State Highway Department, which was later known as Caltrans. During his early years with Caltrans, Frank worked on the building of Interstate 5 as an inspector. 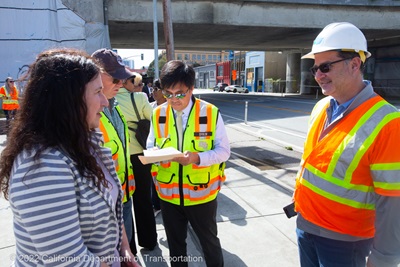 Caltrans has pulled up its proverbial sleeves to help give our state the sprucing up that it needs and deserves. All 12 departmental districts and doing their part to help Clean California, the governor-initiated campaign to make our surroundings tidier. Caltrans right-of-ways and other state-overseen properties are becoming more healthful to the environment and pleasing to the eye thanks to the efforts of thousands of workers and volunteers. Images from recent Clean California events are collected in this photo gallery.

Welcome to the second installment of everyone's favorite new online game! (Well, many people's favorite, anyway. CT News' computer experts are still gathering the analytics.) The game play is simple. CT News presents links to three narration-free videos, all under 35 seconds. They were shot recently alongside (or over) California roadways that are maintained by Caltrans. 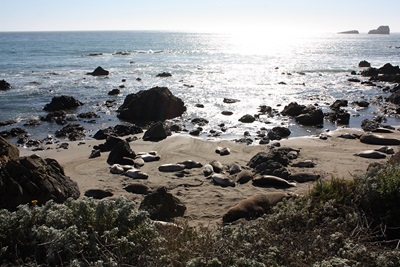 CT News continues its trip down California's most famous roadway by pulling onto southbound State Route 1 at Watsonville during a pleasant day on the coast (aren't they all?) in March. This stretch of the historic highway has been in the news often due to rockslides, washouts and, most recently, for repairs to the striking 1930s-built Bixby Bridge.