District 8 Captures Two Awards for Its Work on 'The Swarm'

When Caltrans road crews were poised to rehabilitate State Route 60, the outreach plan was a winner.

A three-year, $32 million interagency agreement will continue the work of the Partnered Pavement Research Center project.

Greetings, Team Caltrans. First off, major congratulations are in order. Together, we made it through one of the most challenging years imaginable. The COVID-19 pandemic has had a profound impact on our department, but we adapted quickly with teleworking, accelerated construction and maintenance projects, flexible and creative thinking, and in countless other ways. Thank you, and bravo! We also set things in motion that will help make the new year a tremendous success. I want to share with you a few examples.

The acclaim swarms in for District 8

Caltrans and UC: Partners on the road to durability

The highway of tomorrow starts with a vision and ends with construction. It’s taking an idea and turning it into a plan to rebuild a major urban interstate freeway to endure six decades of weather and wear and tear. It’s developing and testing a new formula for fast-setting concrete to allows motorists to drive on newly poured concrete pavement just 24 hours instead of 20 days after last pump truck departs.

It has been said that you need to dig deep to get to the bottom of what you are looking for. This is exactly what Caltrans District 5 geologists and engineers, with the cooperation of the California Geological Survey and academic researchers, have done near a section of State Route 46 East in Cholame in northern San Luis Obispo County.

On the road(s) with Daniel Faigin

How to describe Daniel Faigin’s California Highways website? “Everything You Ever Wanted To Know About Numbered Highways in California, But Were Afraid To Ask” is how the masthead puts it. That’s accurate. Spend a few minutes clicking around California Highways and your jaw is bound to keep dropping as you encounter all the information it contains.

“We're writing to acknowledge Caltrans team's outstanding contribution to proactively manage and mitigate the first detection of sudden oak death in Del Norte County. Thanks to the help of a collaborative team from Caltrans, CAL FIRE, the County of Del Norte, and numerous private landowners, the trees that were infected and hazardous to State Route 197 were expediently removed.”

“I was driving back to South Lake Tahoe on Sunday afternoon and I was surprised the Johnson Road bypass was open — five days ahead of schedule. Well done, Caltrans. And more kudos … to Steve Nelson, the public information officer at Caltrans, for living up to his title and truly continually updating us.”

“It says on your LinkedIn profile 'our staff of nearly 22,000 is working every day to be the best!' I wanted to provide an example of excellence with Caltrans (and CHP) that I experienced on Nov. 16 on the Bay Bridge."

“I have lived on Ogan Road for a little more than 30 years and we have been waiting for the U.S. Highway 101 Linden-Casitas Project in Carpinteria (Santa Barbara County) for some time now. When the project started I was told to contact Caltrans Transportation Engineering Technician Joe Person if I needed information regarding the project."

Woo-hoo, Caltrans, for cutting out the weeds!

"I drove U.S. Highway 101 north from Pismo Beach to the Avila Beach exit a few times in San Luis Obispo County within the last few days. I was quite delighted to see your Caltrans maintenance team doing a lot of weed abatement, trimming mostly on the east side of Highway 101 between the freeway and the neighboring communities."

The start of a new year often prompts people to take stock of where they are in their lives and where they want to be. For some people, the transition from one year to the next is a time to look with fresh eyes at how they can improve their health or relationships. Is there a habit you’d like to change or a specific goal you want to achieve?

A list of Caltrans employees who celebrated 25 or 40 years of service, or who received superior accomplishment awards, in July, August, September, October and November.

A list of Caltrans employees who retired in July, August, September, October and November.

Dennis T. Agar was in October appointed to become the District 10 director. Dennis brings more than 30 years of diverse and valuable Caltrans knowledge that encompasses district and headquarters experience that combines a variety of leadership, managerial, supervisory and technical experience.

Amar Azucena Cid was tapped to become the program manager, supervising transportation planner to lead the newly created Caltrans Office on Race and Equity (CORE). Amar has more than 15 years of progressive planning experience, at all levels of government. For the past six years, Amar has established and developed the CA Climate Investments Low Carbon Transit Operations Program within DRMT.

Tony Taveras was appointed in late October to become District 7’s director. Taveras had served as the District 4 director since 2018, where he managed a $2 billion budget, and led nearly 3,500 employees in the oversight of all modes of transportation on the State Highway System, across all nine Bay Area counties.

Caltrans retiree Eleanor M. Darby passed away on Nov. 29 at English Oaks Convalescent and Rehabilitation Hospital in Modesto, where she spent the last nine months of her life. Eleanor retired from Caltrans. She was a member of the Model "A" Club, the Italian Catholic Federation (ICF) and the Italian Club of Sonora.

Retired Caltrans worker Clyde D. Trammell died Dec. 5 in Fairfield. He was 88. Clyde was born in Colcord, Okla., on June 13, 1932, and moved out west to California in the 1940s to Modesto. He worked for Western Well Drilling for a number of years until he started his career with Caltrans for 34 years and retired in 1993.

Retired Caltrans engineer Richard Lee Tuman Sr. of Lemoore passed away in Visalia on Nov. 25 at the age of 84. Richard was born in Liberal, Kansas. He joined the Army after high school. When he got out of the Army, he attended Brigham Young University. Richard was an inspection engineer for both DWP and Caltrans.

Longtime Caltrans employee Tony Zuniga, age 73, passed away on May 11, 2020. Known for his big smile, he possessed an innate ability to bring joy to those around him. Because of his open-mindedness, extraordinary generosity, profound empathy, endearing personality and keen sense of humor, Tony touched the hearts of those who knew him.

A high-altitude (and very picturesque) triumph near Lake Tahoe 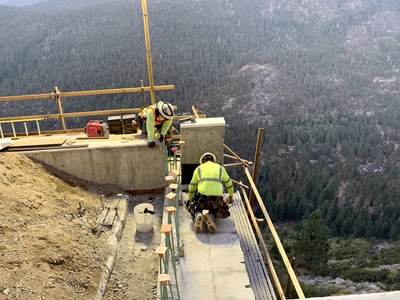 In late October at Echo Summit along U.S. Highway 50, Caltrans completed (ahead of schedule!) a two-season project to replace a bridge that served motorists for more than 80 years as they drove to and from South Lake Tahoe. Construction, which started last spring, included a full closure of Highway 50 over the summit this fall to install seven 96-foot bridge girders. This gallery shows how the project unfolded from mid-September until completion. (District 3 photographs by Steve Nelson, Brandon Miller and Tyler R. Harper)

A back-roads journey to one of the state's national parks 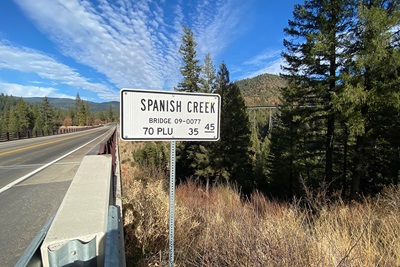 Most people get to Lassen Volcanic National Park via Interstate 5, from the west. That's the fastest way. For those lucky, unhurried folk who while park-bound also would like to get acquainted with some of Northern California's remote mountain towns, CT News spotlights this alternative route.