Information about submitting comments can be found at:
https://crenvvpm.wixsite.com/99corridor/submit-comments

A Virtual Public Hearing was held on November 4, 2021.
Materials presented can be viewed on the Project Information Website:

All build alternatives would reconstruct the existing overcrossings and construct on- and off-ramps to form complete full interchanges, with sidewalks, curb and gutter, lighting and signalization, and a stormwater system. The existing half interchange ramps at Cedar Avenue would be closed. 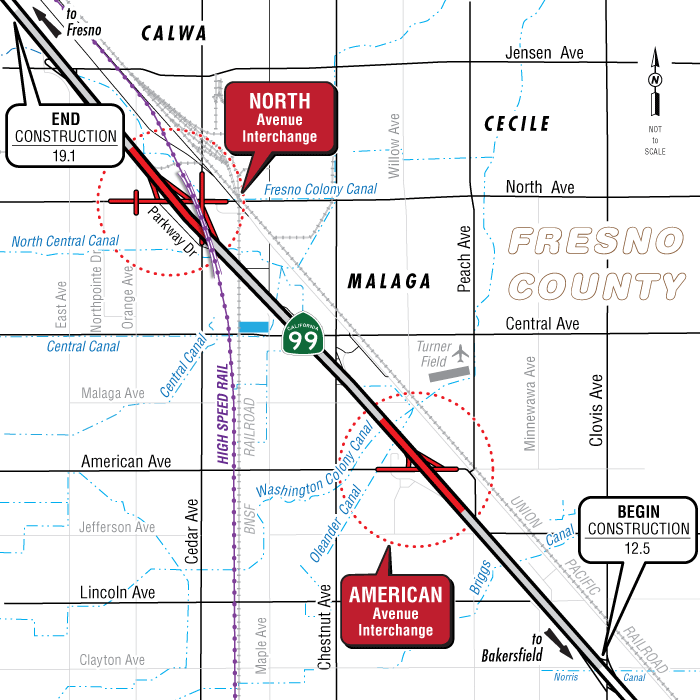 The project would improve traffic operations at the interchanges and on the intersecting and nearby local streets and intersections in the project area through updates to transportation facilities involving roadway dimensions, signals, stormwater, sidewalks and bicycles, and lighting. The improved facilities would meet current Americans with Disabilities Act (ADA) standards. The project would result in lower air emissions on the local road system and improved access for businesses in the project area and to destinations in the surrounding area.

The purpose of the South Fresno State Route 99 Corridor project is to improve traffic operations of the existing interchanges at American and North avenues and to bring the interchanges up to current standards.

The interchanges do not meet current Caltrans design standards. The interchanges were built in 1965, and the pavement is now old and highly deteriorated. Only two traffic lanes cross the existing structures over the highway: one lane for each direction of travel. The existing interchange configurations are non-standard and are “partial” or “split” to form half interchanges at American Avenue, Cedar Avenue and North Avenue.

Traffic is expected to increase in the project area due to the implementation of planned development on both sides of the highway. Caltrans traffic studies show the operation and performance of the interchanges need updating now because traffic conditions will continue to worsen if no improvements are made.

The total cost for the project is estimated to range from $119 million to $146 million using 2021 dollars.