The figure below displays annual pedestrian exposure (or volume) estimates for 2016 for intersections on the California state highway system. These estimates were developed for Caltrans as part of the Pedestrian Safety Improvement Program by the UC Berkeley Safe Transportation Research and Education Center (SafeTREC).

Model Estimates: The pedestrian volumes displayed on the map are estimates developed from a direct demand model; they are not observed counts. The model is based on short term counts conducted at more than 1,200 local and highway intersections around the state as well as the attributes of the areas surrounding the intersections, such as population, employment density, and street network characteristics.

Scope: The model was limited to exclude state highway locations where pedestrian activity is unauthorized or unlikely. Freeways and most expressways are excluded. The model includes state highway intersections that are within 200 meters of a Census block with a minimum population density of 500 people per square mile. This threshold filters out very low population locations, mostly rural, where pedestrian activity is very low or unmeasurable. 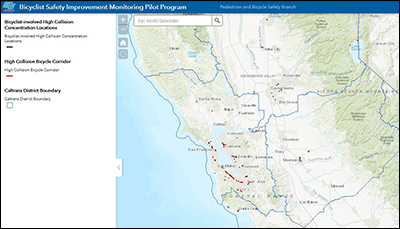