For information about the September 13, 2021 Virtual Public Informational Meeting, please see below or click the following link:

Caltrans will remove and replace the Alamo Pintado Creek Pedestrian Bridge (bridge number 51-0076Y) at post mile R2.6 on the south side of State Route 154 in the town of Los Olivos in Santa Barbara County. The project will also remove a retaining wall and install rock slope protection to protect the channel banks from erosion. The existing bridge structure is 92 feet long by 28 feet wide and spans the Alamo Pintado Creek. T

he Alamo Pintado Creek Pedestrian Bridge was constructed in 1912. In 1971, a new bridge structure—Alamo Pintado Creek Bridge (bridge number 51-0076Y)—was built upstream of the existing structure. The new bridge was built on a new alignment 40 feet upstream from the original structure. At that time, local citizens contacted the State to leave the 1912 structure so it could be used as a pedestrian/equestrian trail bridge. Concrete footing encasements were built around the pile caps of the existing structure. However, these encasements eventually became exposed and undermined.

Today, the old Alamo Pintado Creek Pedestrian Bridge is used by pedestrians, bicyclists, and equestrians. Critical scour of the pile and pier foundation has caused settlement of the bridge deck. A bridge inspection on September 28, 2011 was used to prepare a Bridge Needs Report dated March 29, 2012. The report determined the abandoned bridge is no longer stable with respect to gravity load, and the bridge is sinking slowly at the supports. In the inspection report, recommendations were made to retrofit the bridge or simply remove the bridge. Since those recommendations were made, it has been determined that retrofitting the substructure would result in significant substructure modifications, including seismic retrofitting, scour mitigation, embankment armoring, and foundation retrofitting.

The project would remove the abandoned Alamo Pintado Creek Pedestrian Bridge (bridge number 51-0076Y), remove the retaining wall next to the bridge, and place rock slope protection in that area. The bridge superstructure would be removed from above the creek, while the piers and foundation portion would be removed from below. Minor grading and embankment restoration would also be necessary within the proposed construction easement. This project contains a number of standardized project measures that are used on most, if not all, Caltrans projects and were not developed in response to any specific environmental impact resulting from the proposed project. 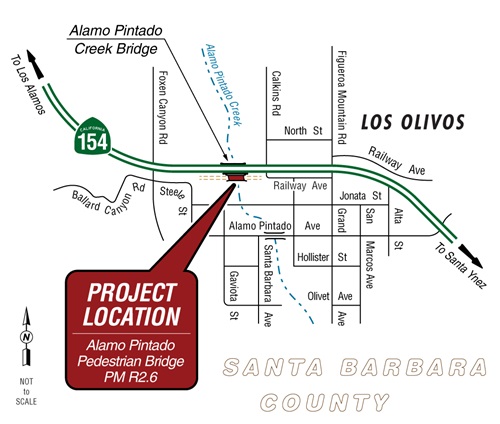 The purpose of this project is to reduce the risk to users from a bridge failure.

A Bridge Inspection Report (September 28, 2011) identified critical scour of the pile and pier foundation of the abandoned highway bridge (bridge number 51-0076Y) at post mile R2.6 on the south side of State Route 154. The report concluded the bridge structure is no longer stable with respect to gravity loads. Creek channel degradation has resulted in heavily exposed bridge piles, causing the bridge to sink at its supports.

A virtual presentation of the aesthetics design for the bridge railings and discussion of the interpretive displays will be held on Monday, September 13, 2020, from 6:00 p.m. to 7:00 p.m. The meeting will be held on the WebEx platform, see details below on how to join.

To Join the Meeting:

You may join the meeting by mobile device or by phone.

Questions or comments can be submitted to:

Below you will find a survey that asks about your race, gender, and nationality. The survey is completely voluntary. Caltrans is collecting these surveys for the following reasons:

Caltrans will compile the data received and enter the data in our system within 7 days.

If you have any questions regarding the survey, please contact the Office of Civil Rights at (916) 324-8379 or Title.VI@dot.ca.gov.

We thank you for your participation.