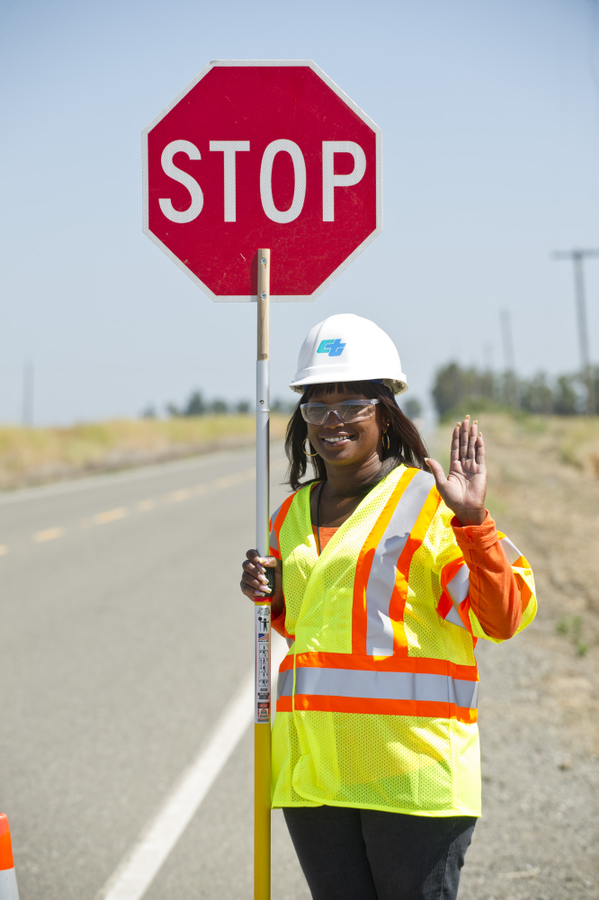 This instruction handbook is for informational purposes only

NOTE: These guidelines are for flagging operations. In this manual, the term “traffic” means vehicles, pedestrians, bicyclists, and all users of highway for the purpose of travel.

Section 1599, “Flaggers” of the Construction Safety Orders (California Code of Regulations [8 CCR 1599]) requires that flaggers be trained in the fundamentals of flagging moving traffic before being assigned as flaggers. The training requirements for flaggers are included in Part 6, “Temporary Traffic Control,” of the California Manual on Uniform Traffic Control Devices.

Training must be provided by a provider with the qualifications and the experience necessary to effectively instruct the employee and must be documented as required by 8 CCR 3203, “Injury Illness and Prevention Program.”

Flaggers are responsible for public safety and for temporary traffic control. Because flaggers have frequent contact with traffic, they should demonstrate the following abilities:

Flagger stations must be located such that the traveling public has sufficient distance to stop at an intended stopping point before entering the work space. Flagger stations should be preceded by advance warning signs. Except in emergency situations, flagger stations must be illuminated during hours of darkness with a minimum 20-foot-diameter illumination footprint (at 10 foot-candles in accordance with 8 CCR 1523) so the flagger is clearly visible to approaching traffic.

Location and visibility are important factors in flagging operations. Observe that:

The following chart shows the distance of flagger stations in advance of work areas.

Distance of Flagger Station in Advance of the Work Area

Section 12-3.36 “Portable Transverse Rumble Strips,” of the Standard Specifications requires the use of portable transverse rumble strips in conjunction with flagging operations on two-lane conventional highways.

The contractor must develop a plan for how to place the transverse rumble strips as part of the traffic-control operations. Placement must be in accordance with Revised Standard Plan (RSP) T13 and:

Portable transverse rumble strips are not required if any one of the following conditions is met:

The flagger should stand on the shoulder next to the traffic being controlled. A flagger may only stand in the lane being used by moving traffic after traffic has stopped. The flagger should be stationed sufficiently in advance of workers to warn them, for example, with audible warning devices such as horns or whistles, of approaching danger by out-of-control vehicles.

The flagger should be clearly visible to traffic at all times and must:

Stopping distances vary because of changing road and weather conditions. On an icy road, for example, a vehicle may travel four times the distance required to stop on dry pavement.

The following chart compares stopping distances for a variety of road conditions. It may be used to determine the visibility distance for traffic approaching the flagger. 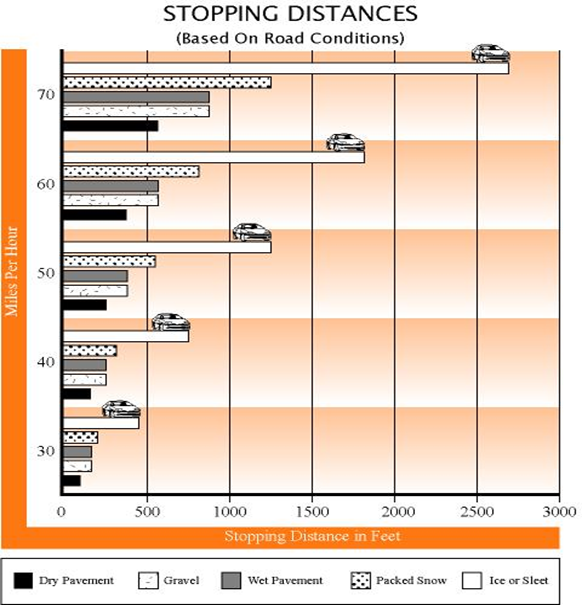 Flaggers must wear ANSI/ISEA 107-2004 or equivalent subsequent revisions, Class 3 apparel with a material color that is either fluorescent orange-red or fluorescent yellow-green, or a combination of the two as defined in the ANSI standard. The retroreflective material must be orange, yellow, white, silver, yellow-green, or a fluorescent version of these colors and must be visible at a minimum distance of 1,000 feet. 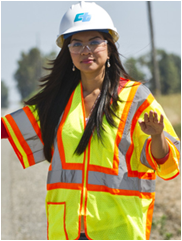 The retroreflective clothing, or the retroreflective material added to the clothing, must be designed to clearly identify the wearer as a person and must have a minimum of one horizontal stripe around the torso. High-visibility clothing must be kept clean and in good repair or replaced.

Flaggers must wear safety glasses and a white hardhat

When uniformed law enforcement officers are used to direct traffic within temporary traffic control zone, they must wear high-visibility clothing as described previously or ANSI/ISEA 207-2006 or equivalent revisions.

Hand-signaling devices, such as STOP/SLOW paddles or lights, and red flags, are used to control the vehicles through temporary traffic control zones, and must be visible to the first approaching driver at all times. 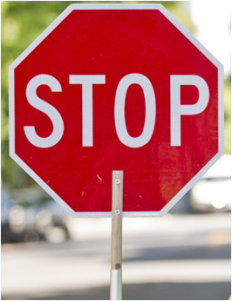 Flags must only be used in emergency situations and only until a STOP/SLOW paddle is available.

Flags must be a minimum 24 inches square, made of a good grade red material, and securely fastened to a staff that is approximately 36 inches long. The free edge of a flag should be weighted so the flag will hang vertically, even in heavy winds. Flags must be retroreflective when used at night.

Each advance warning sign in each direction of travel must be equipped with at least two flags for daytime closures. Each flag must be at least 16- by-16 inches and must be orange or fluorescent red-orange. Flashing beacons must be placed at the locations indicated for lane closures during hours of darkness. 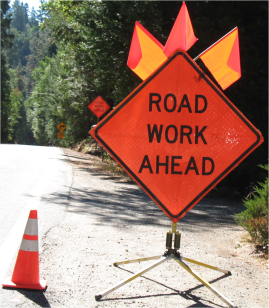 Additional flagger equipment includes: channelizing devices, such as cones; a method of communication, such as 2-way radios and other auditory warning devices as needed; drinking water; and protective clothing in case of a change in weather.

The STOP/SLOW paddle is the primary and preferred hand-signaling device because it gives the public more positive guidance than red flags. Use of hand signaling with red flags is limited to emergency situations.

Each signal with the STOP/SLOW paddle is three parts: the message shown on the paddle, the flagger’s gesture with the free hand, and the position taken by the flagger.

The following methods of signaling with STOP/SLOW paddles must be used.

To stop traffic, face traffic and aim the STOP paddle face toward traffic in a stationary position with the arm extended horizontally away from the body. Hold the free arm with the palm of the hand above shoulder level toward approaching traffic. 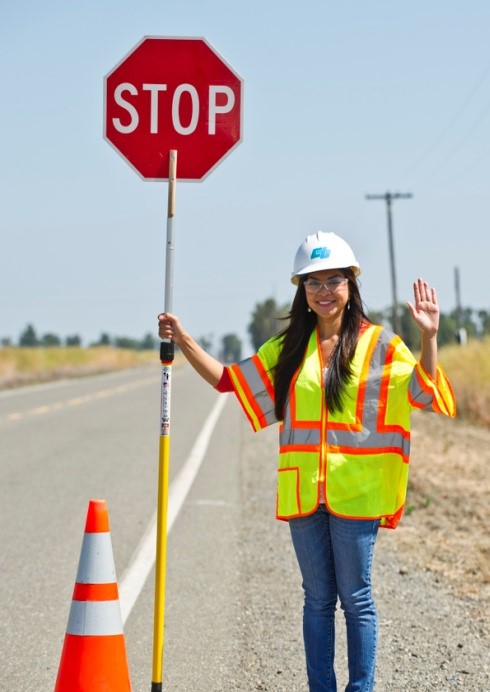 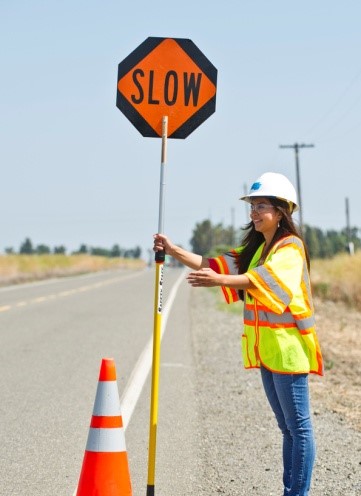 To Alert and Slow Traffic

Flags Must Be Limited to an Emergency

The following methods of signaling with a flag must be used:

To stop traffic, face traffic and extend the flag staff horizontally across the traffic lane in a stationary position so that the full area of the flag is visibly hanging below the staff. Hold the free arm with the palm of the hand higher than shoulder level toward approaching traffic.

To alert or slow traffic, face traffic and slowly wave the flag in a sweeping motion of the extended arm from shoulder level to straight down without raising the arm above a horizontal position. Keep the free hand down.

One-way traffic control is typically handled by a single flagger at each end of the work zone. A pilot car may be used with flaggers to guide traffic through work zones. At spot location lane closures where adequate sight distance is available for the safe handling of traffic, one flagger may be appropriate. 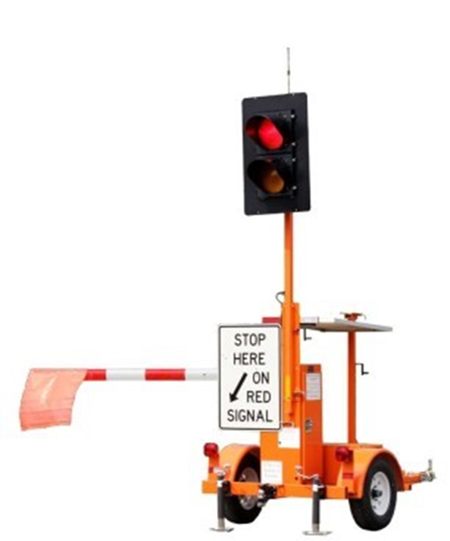 The AFAD is an automated flagging device operated by a flagger located off the roadway and away from traffic. The device is essentially an extension of the flagger’s arm. Flaggers use a remote control instead of a SLOW/STOP paddle to control the movements of traffic. The device is considered a safety enhancement for projects that use reversible temporary traffic control because it minimizes flaggers' direct exposure to traffic by allowing them to control traffic from an area away from the traveled way.

Additional flaggers control the flow of traffic at intermediate locations within the limits of a closure with reversible control, at intersections, driveways and other traffic merging points. 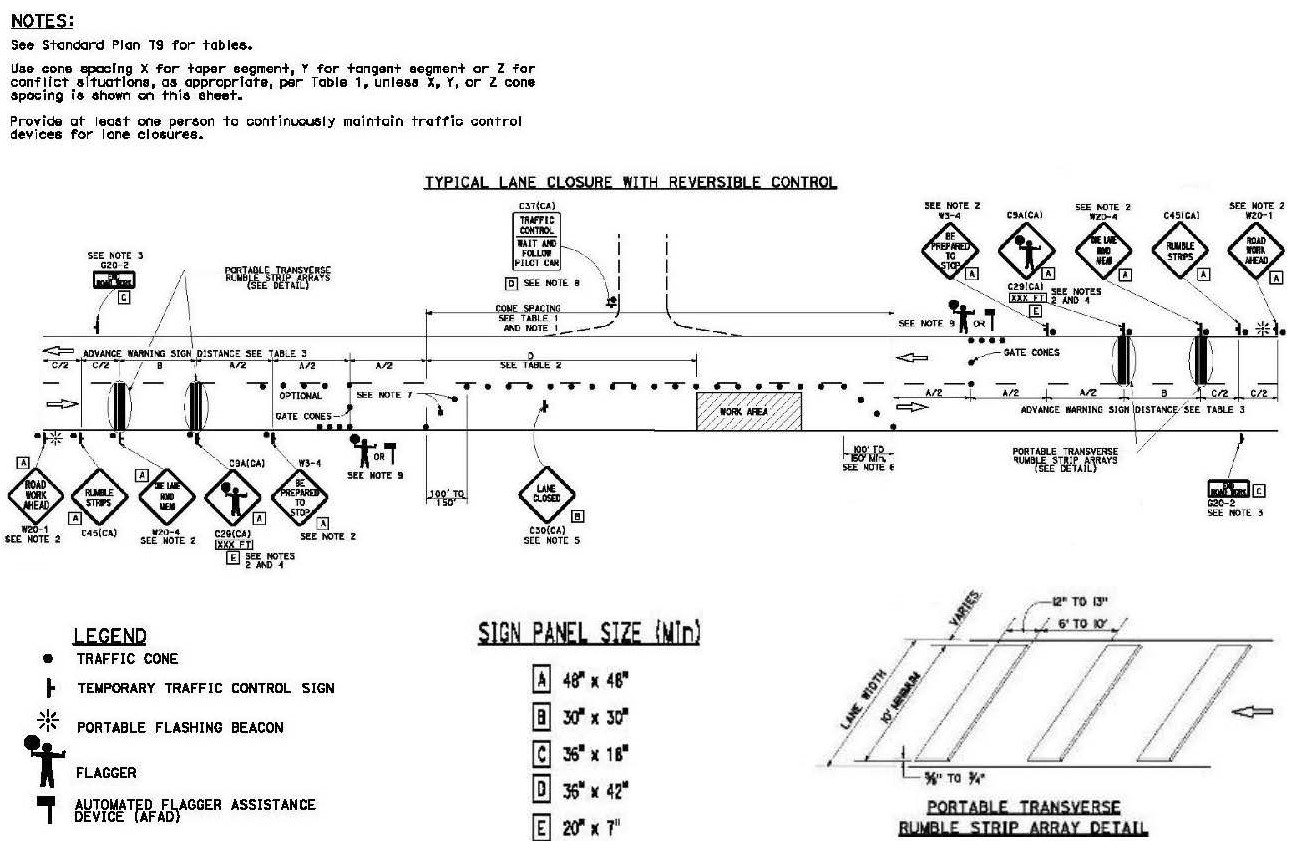 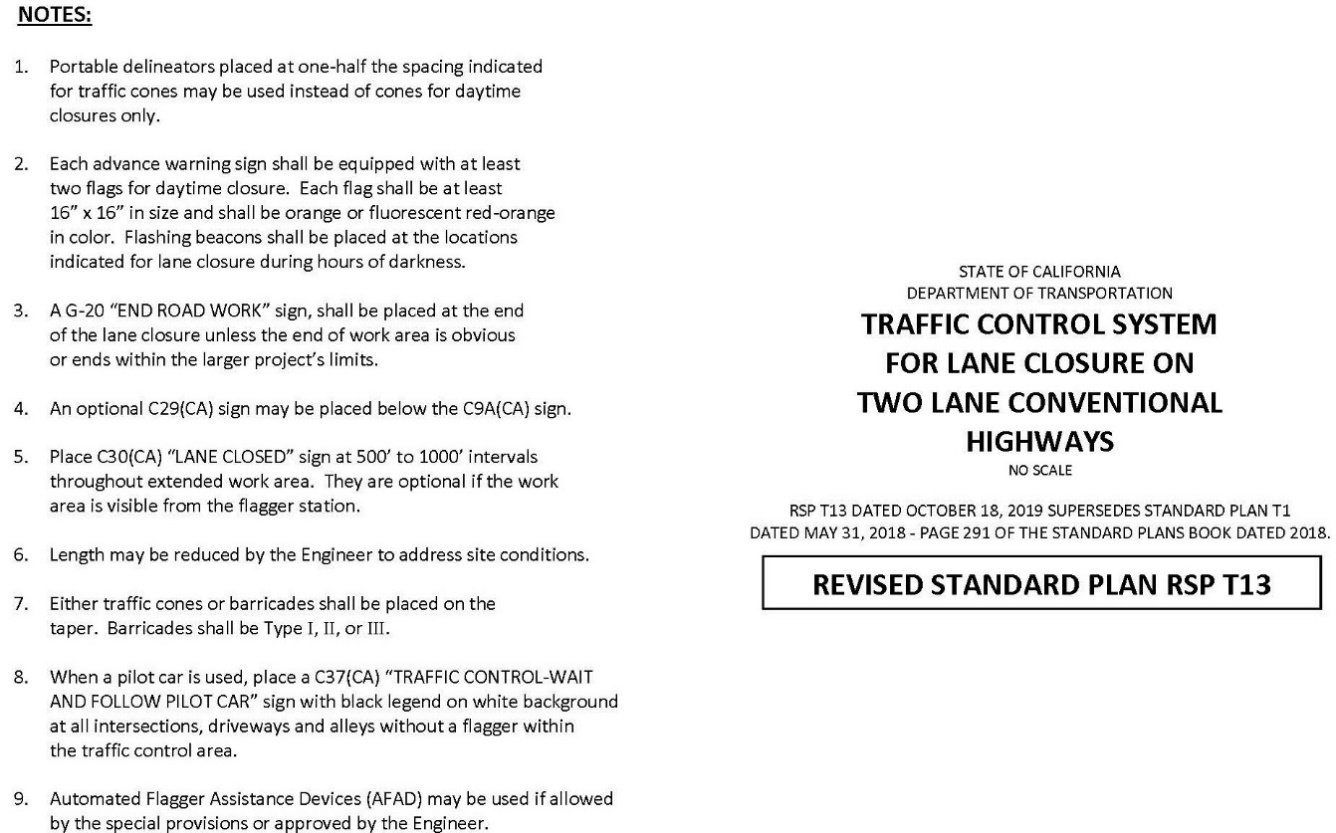 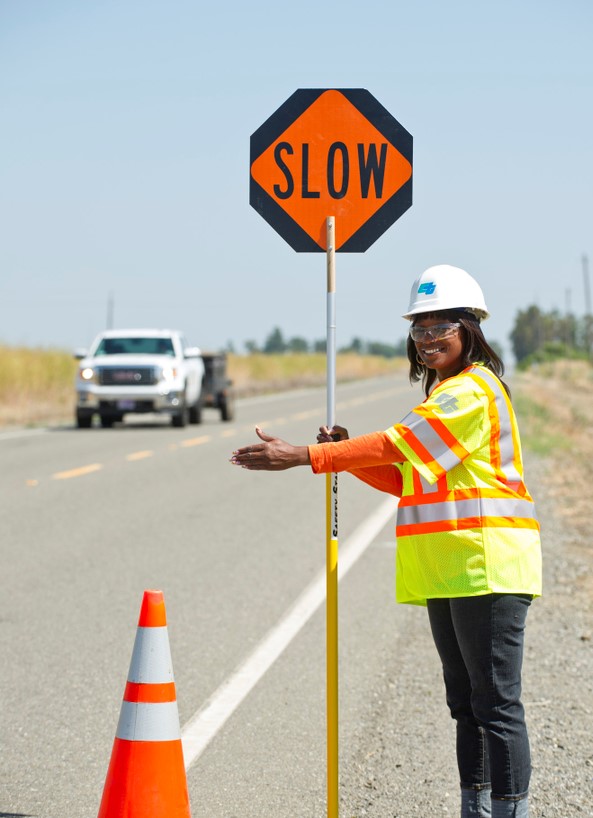