The California Department of Transportation (Caltrans) proposes to provide a permanent solution to the failure of the cut slopes of the original State Route 25 Curve Realignment Project. In December 2015, construction was completed on the original project where a tight curve was straightened by cutting back slopes through a hillside and realigning the roadway. Soon after construction was completed, the cut slopes on both sides began to fail, and the newly constructed roadway needed to be closed for the safety of the traveling public. Under an emergency project, a temporary detour was constructed along the historic roadway alignment and is functioning today with temporary stop signs with flashing beacons to allow traffic to continue to use the highway. The temporary detour is an interim solution, and the proposed project will provide a permanent solution.

The proposed project is located in San Benito County on State Route 25, approximately 32 miles south of the city of Hollister. The proposed project would provide a permanent solution to the failed 2015 State Route 25 Curve Realignment Project by flattening the cut slopes to 2:1 (horizontal to vertical dimensions) to reduce erosion, promote revegetation regrowth, and prevent repeated slope failure. The horizontal curves and banking of the roadway will vehicles to travel through the curve more safely.

Approximately 72,000 cubic yards of material would need to be excavated. The project would construct two 12-foot lanes with 4-foot outside shoulders. Existing right-of-way is approximately 30 feet from the centerline of the roadway. Because the existing right of way cannot accommodate the proposed flattening of the slopes, additional permanent right-of-way acquisition would be required. It is estimated that 17 blue oak trees and 1 valley oak tree may need to be removed to accommodate the proposed project. Impacts to trees will be offset by replacement planting within the project limits. In total, a minimum of 191 blue oak trees will be planted within the proposed planting areas. A three-year plant establishment period is proposed. The scope of the replacement planting would be entirely within the limits of this project and within existing and proposed state right-of-way. 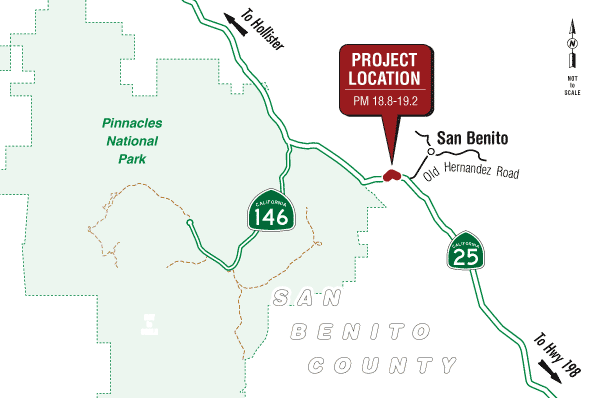 Need: The original State Route 25 Curve Realignment project completed in 2015 was needed to reduce a higher than average number of collisions of similar roadways throughout the state. Because of the cut slope failure of the original project and closing of the roadway, the need for the original project has not been met. Although the temporary detour is currently functioning as an interim solution under the operation of stop signs with flashing beacons, it cannot function as a permanent solution nor does it address the failure of the cut slopes. In addition, replacement of the blue oak trees removed from the original State Route 25 Curve Realignment Project has not been completed. Therefore, the proposed project is also needed to address the replacement of the blue oak trees.