Caltrans proposes to replace the northbound and southbound bridges at Refugio Road along U.S. 101 near Refugio State Beach (post miles R36/R37). The new concrete bridges would have about the same alignment, profile, and lane configuration as the existing bridges, but would be 7 feet wider to accommodate standard 10-foot shoulders. Two build alternatives were considered, and the clear-span bridges have been identified as the preferred alternative:

Both build alternatives would also remove a partial fish passage barrier caused by the existing concrete-grouted rock slope protection lining in Cañada del Refugio Creek. The rock slope protection would be removed from the creek bed and naturalized with gravel and stone, and the riparian corridor would be replanted with trees and other riparian plants. Other project elements include upgrading bridge rails on the northbound U.S. 101 on-ramp bridge, rehabilitating the existing pedestrian pathway beneath the bridges, and updating the lighting system through the project limits. 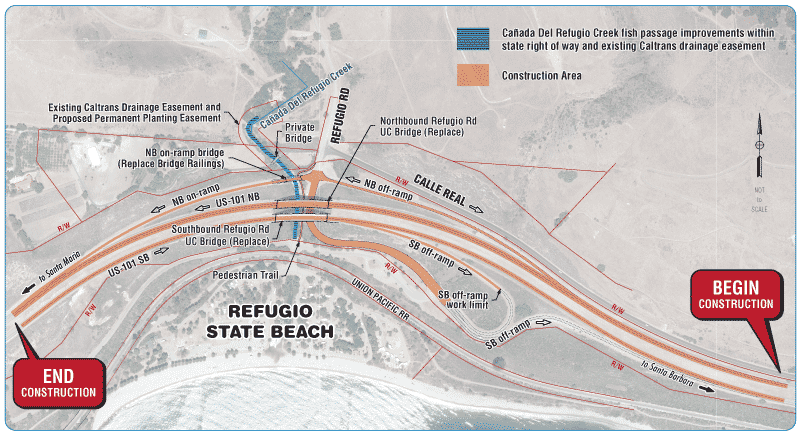 Purpose: The purpose of the project is to ensure the safety and reliability of the U.S. 101 corridor by addressing the presence of alkali-silica reactivity in the northbound and southbound Refugio Road undercrossing bridges. Another objective of the project is to improve anadromous fish migration within the project limits at Cañada del Refugio Creek while maintaining the bank stability needed to protect the bridges from scour.

Fish passage improvements are needed because the portion of Cañada del Refugio Creek that was lined with concrete-grouted rock slope protection during construction of the Refugio Road Bridges in 1974 is a partial barrier to the migration of Southern California steelhead trout and other anadromous fish. California Fish and Game Code Sections 15901 and 15931 make it unlawful to impede fish passage and Article 3.5 of the California Streets and Highways Code Section 156 requires that Caltrans remediate fish passage barriers for any project using state or federal transportation funds that affects a stream crossing on a stream where anadromous fish are currently, or were historically, found.

The project would be paid for with 2018 State Highway Operation and Protection Program (SHOPP) funds and is eligible for federal-aid funding. The current year estimated capital outlay project cost is $42,515,000 for Alternative 1 and $35,539,000 for Alternative 3.