For information about the May 26, 2022 Virtual Public Meeting, please see below or click the following link:

State Route 183 (Merritt Street) is a conventional highway that serves as the “Main Street” through Castroville. The narrow right-of-way in this older, suburban setting makes it necessary to acquire permanent (or fee) right-of-way to complete sidewalk, curb ramp, and minor operational improvements; and to obtain Temporary Construction Easements for transitions or tie-ins on nearby property. Approximately 82 parcels would be impacted. 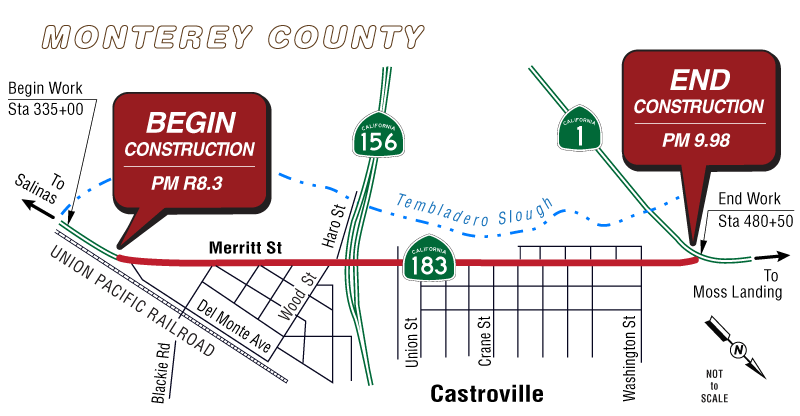 Purpose: The purpose of this project is to address structural deficiencies and improve multimodal travel along State Route 183 (locally known as Merritt Street) through the census-designated town of Castroville. More specifically, the following goals have been identified within the project limits:

Need: The pavement within the project limits is showing signs of distress and unacceptable ride quality. Poor ride quality results from uneven road surfaces such as swells, bumps, sags, or depressions. The asphalt concrete pavement south of State Route 156 was reconstructed in 1978 and has provided more than 40 years of useful life; however, it needs to be rehabilitated. The asphalt concrete pavement from State Route 156 to State Route 1 was reconstructed in 1999 and needs a new surface wear course. If pavement improvements do not occur, the pavement will continue to deteriorate, leading to more costly repairs in the future.

The Bridge Inspection Report for the State Route 183/State Route 156 Separation Bridge (Bridge Number: 44-0185), dated August 2016, lists deck cracking as a deficiency, which, if unaddressed, would lead to water intrusion and rapid aging. Portions of the existing concrete deck and vertical bridge rail are deteriorating into small fragments or chips, which is also known as spalling. Portions where spalling has occurred would be repaired to prolong the service life of the bridge.

Per the Caltrans Complete Streets Program, a complete street is a transportation facility that is planned, designed, operated, and maintained to provide safe mobility for all users, including bicyclists, pedestrians, transit vehicles, truckers, and motorists appropriate to the function and context of the facility. Every complete street looks different because it is based on context, community preferences, the types of road users, and their needs. Merritt Street lacks the necessary infrastructure to make it a complete street.

Pedestrian facilities in the project limits are inconsistent and nonstandard in design with narrow sidewalks, steep driveways, missing or nonstandard curb ramps, and an absence of walkways at the back of driveways. These conditions create barriers for people with disabilities and discourage walking along Merritt Street. Pedestrians must walk over uneven pavement and navigate around street trees, light posts, newspaper stands, fire hydrants, and other items on the sidewalk. Most street trees do not have adequately sized planting wells, and tree roots have cracked and upended sidewalk pavement. Steep driveways and the absence of sidewalks along the back of driveways are one of many barriers to a pedestrian-friendly community, particularly for people with disabilities. The existing curb ramps are typically too steep, potentially causing wheelchairs to snag their footrests on the gutter.

Some of the signalized intersections within the project limits lack the newer, enhanced audible Accessible Pedestrian Signals and Countdown Pedestrian Signal head systems. An Accessible Pedestrian Signal and pedestrian push-button is an integrated device that communicates information about the “Walk/Don’t Walk” intervals at signalized intersections in nonvisual formats, like tones and vibrations. It provides a signal to the push-button that assists visually impaired persons when navigating the crossing movement. Countdown Pedestrian Signal head systems and the “Walk/Don’t Walk” and “Upraised Hand” signals display a numerical countdown of the seconds remaining for the pedestrian crossing interval.

Bicycles are allowed on the entirety of Merritt Street, which is designated as a Class 3 Bikeway (bike route) through the State Route 156 interchange between Haro Street and Salinas Street. No bicycle features exist within the project limits, and without specific lane striping or other markers, there is nothing to alert motorists to a designated travel way for bicyclists. Bicycles share the road, use the shoulder, or travel in unmarked areas between parked cars and the through lane. Defined bicycle pathways along Merritt Street through the community could enhance driver awareness of bicycles in the flow stream. Furthermore, the project corridor lacks bicycle racks and dedicated bicycle parking to help bicyclists feel secure about their property. Some of the existing drainage grates in the road shoulder are nonstandard and have openings in the direction of travel, which can impede bicycle travel when a wheel gets caught in the drainage grates. This may result in sudden swerving or lane changes by bicyclists’ attempt to avoid these obstacles. The Federal Highway Administration recommends the use of drainage grates designed to minimize risks for bicyclists.

The existing State highway right-of-way width for Merritt Street within the project limits varies considerably, ranging from 66 feet to 123 feet. This results in a variety of roadway cross sections of the roadway with inconsistent dimensions for shoulders, sidewalks, driveways, and bicycle lanes. The outcome of this inconsistency is an intermittent and sporadic pattern of facilities along this segment of the highway corridor. Merritt Street is too narrow to accommodate the sidewalks, driveways, curb ramps, completion of a Class 2 bike lane, and the northbound right-turn lane at the eastbound on-ramp to State Route 156. Permanent (or fee) acquisitions of right-of-way and Temporary Construction Easements are necessary to make the needed improvements.

Traffic data collection is essential for traffic management decision-making and public awareness. The traffic census stations at Walsh Street, Pajaro Street, and Washington Street need replacement because they use outdated technology and require state workers to enter and cross the traveled lanes to set up and teardown the counting equipment. Traffic management frequently relies on closed-circuit television camera systems to monitor route efficiency and real-time traffic conditions. Traffic monitoring is limited for the area since there are no closed-circuit television camera systems at the State Route 183 and State Route 156 interchange.

A virtual town hall meeting was held for the project on Thursday August 26, 2020. During the virtual town hall meeting, the project was presented and input from the public was requested. The public expressed concern about excessive speed and congestion in the downtown area. They also expressed concerns with traffic coming from State Route 1 and not slowing when entering the downtown area.  As a result of public input the project will add traffic calming measures at select locations in the downtown area that would help reduce vehicle travel speeds and raise driver awareness of pedestrians entering the roadway.

The public comment period for the draft environmental document started on Friday, May 7, 2021, and ended on Friday, June 11, 2021.

Caltrans has worked in partnership with the Transportation Agency for Monterey County, Monterey-Salinas Transit, Monterey County, and the Castroville Community Services District to coordinate and develop the scope of this project.

To Join the Meeting:

You may join the meeting by mobile device or by phone.