A ghost ride into the high plains

Road Trippin' goes to the end of the line, and back in time, on State Route 270
Photograph by CT News

In District 2, this technology really flies

District 7 bridges get over their problems

Director's Orders set the stage for a pair of emergency repairs south of downtown L.A.
Photograph by District 7

Focus on our Four Foundational Principles

The Director’s Message updates will mostly focus on our Four Foundational Principles: Safety, Equity, Climate Action and Economic Prosperity in our Communities. As I have emphasized before, these tenets are not abstract concepts, but rather the concrete framework guiding all our plans and projects.

Caltrans is mourning the death of Ali Shabazz, 48, a Civil Engineer for the department. Shabazz was killed while on duty when he was involved in a fatal vehicle collision in Fresno County. Shabazz had served Caltrans for more than 16 years, joining the department in 2006. He is survived by his wife, Nia, and their eight children.

District 10 is fortunate to have Ruby Islas, who runs perhaps the best print shop anywhere. From her post inside the mailroom in the basement of the main building in Stockton, Ruby works as a digital print operator in Reprographics/Mail Services and has expert command of heavy-duty, high-tech equipment she uses to perform a variety of printing tasks that assist every facet of the department.

For over 10 years, Scott Tikalsky has worked at Caltrans. As the Redding Field Surveys Branch chief for the North Region Office of Surveys, he commands four field survey crews and manages the workload for all things “survey” for Caltrans in the North state. It’s a position that requires adaptability and implementing new technological advances that change the way Caltrans conducts business.

Under Bridge Inspection Trucks (UBITs) have been the most common tool used to gain access in difficult areas of bridges throughout California for many years. These trucks provide crews the ability to get underneath bridges to inspect areas that would otherwise be unreachable. But with more than 24,000 bridges to inspect in California, inspectors have been seeking more efficient ways to get the job done.

Caples Lake veteran has control over his domain

Maintenance workers in the Sierra Nevada kind of brush it off when someone asks if their job involves more than a fair share of risk. Jeff Brees has expertly accomplished potentially dangerous tasks for 10 years with Caltrans District 10 and for close to 40 years altogether. What many would consider hair-raising, Brees takes in stride as an Operator II, CEO II at the Caples Lake Maintenance Yard.

Soon, Groveland will be ready for its close-up

A team effort between Caltrans District 10 and our valued partners in Tuolumne County led to a community celebration that shined the spotlight on our Clean California campaign. District 10 hosted a public event in the High Sierra community of Groveland on May 20, to recognize $1.27 million in Clean California grants that have been awarded for local projects.

In District 7, bridges get emergency fixes

District 7 recently had two emergency Director’s Orders for bridge repairs. They were on State Route 1 (Pacific Coast Highway) crossing over State Route 103 in Wilmington, and at the juncture of State Route 103 and State Route 47 in the Port of Long Beach. The latter bridge was damaged when a big rig carrying a 48,000-pound roll of lost its load.

“I just wanted to send a note saying thanks and that I think you are great. We drive the 101 here in Santa Barbara all the time. It's our main street. And it gets a little messy, and slow, and things shift. Lanes move. Pavement changes. And then one day ... voila! A brand-new road. I know it's not done, but the six lanes in Carpenteria look beautiful.”

“I'm writing to thank the dedicated road maintenance workers for their efforts to improve the areas along the Highway 101 corridor in Atascadero. Their commitment and dedication to making the right-of-ways along both sides of the highway safer for travelers is greatly appreciated. We know the work is hard and very dangerous.”

When your life is in balance between home and work, you feel emotionally and physically healthy, able to take things in stride, and positive about the future. However, many people struggle to balance their full-time jobs and personal responsibilities. The list of demands on our time can seem endless.

Ryan Greenway is the new assistant federal liaison in the Director’s Office. Prior to this position, Ryan served as the Southern California Regional Rail and Transit coordinator for Caltrans’ Division of Rail and Mass Transportation, where he provided technical expertise and strategic policy direction in rail and transit planning. Prior to joining Caltrans, Ryan served as environmental manager for the California High-Speed Rail Authority.

Governor Gavin Newsom on June 17 announced the appointment of Tony Tavares as Caltrans director. He had been serving as District 7 director. “Tony Tavares has dedicated his career to serving the people of California, with decades of leadership and deep experience overseeing critical transportation issues spanning the state,” Newsom said.

A list of Caltrans employees who celebrated 25 or 40 years of service, or who received superior accomplishment awards, in June and July.

A list of Caltrans employees who retired in June and July.

Retired Caltrans employee Michael “Mike” Eagan died this spring at the age of 75. Mike began his career with Caltrans District 1 as a junior engineer in 1965 and retired after over 40 years in 2008 as the design manager for the Eureka and Redding offices. Over the years, Mike oversaw the design of more than 300 projects.

Equipment operator Brett Austin Hall, born July 23, 1996, in Eureka to Brenda and Richard Hall, passed away peacefully in San Francisco surrounded by the love of his mom, dad, bonus mom Kris and sister Kacie on June 12.

Gary McSweeney, 82, passed away peacefully at home on May 14 in Idaho after a long battle with pulmonary fibrosis. Gary worked as a transportation planning engineer for the state of California (CalTrans) for 30 years until his retirement in 1994. After retiring, Gary and Jan traveled a bit and ultimately settled down in Hayden, Idaho, in 1996.

Orville Francis Watowa, 90, passed away May 15 in Buena Park. He was 90. He worked as a light and heavy equipment operator in supervisory and lead roles for over 36 years for the state of California Highway Department (Caltrans), until his retirement on Dec. 31, 1996. 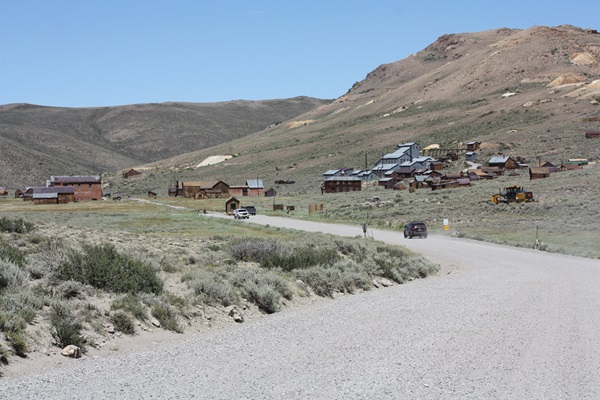 Boo! There are ghosts in Eastern California, high up on a plain above Mono Lake. Bodie State Historic Park is one spectacularly scenic (and marginally spooky!) place that delights thousands of vehicle-delivered tourists every summer and a smattering of snowmobiling souls in the colder months. State Route 270, about as short as them come in the state highway system, is how CT News ventured out to Bodie in late July.

Welcome to the fourth installment of CT News' "video game," players of which are ideally amused and engaged, and winners of which have zero chance of being awarded with any meaningful prizes. The game play is simple. CT News presents links to three narration-free videos, all under 40 seconds. They were shot recently alongside (or over) California roadways that are maintained by Caltrans. Email your guesses of roadway and location to CT News by Sept. 30.