Deficiencies on US 101 in the Prunedale area were recognized in the 1960s when a project was initiated to improve the corridor by constructing a new alignment that bypassed the community of Prunedale. Route adoptions, freeway agreements, and substantial right-of-way for the adopted bypass alignment were acquired in conformance with procedures at that time. The procedures did not include requirements of the National Environmental Policy Act, the California Environmental Quality Act, or other environmental laws now in effect.

A Report of Route Studies was prepared and presented to the California Highways Commission (CHC), the pre-cursor to the current California Transportation Commission (CTC), by the State Highway Engineer on April 3, 1964, where different alignment alternatives and cost estimates were developed. On April 15, 1964, the State Highway Engineer presented a resolution to the CHC for authorization to give a public notice of intent to adopt an alignment based on the Report of Route Studies. This resolution also gave notice to Monterey and San Benito Counties of the Department’s intent to adopt an alignment and provided the entities an opportunity to determine whether a public hearing with the CHC would be necessary.

The Prunedale Bypass Project was re-initiated as a locally funded (Measure B sales tax) project in the late 1980s. Under the federal and state environmental laws at the time, alternative alignments, including the adopted route, were developed and evaluated. A Draft Environmental Impact Statement/Draft Environmental Impact Report (DEIS/DEIR) was circulated to the public in1993. The local sales tax measure was challenged and overturned in court, and lack of funding again halted the project. A Final EIS/EIR was never completed. As a result of halting the Prunedale Bypass Project, a series of operational improvements was completed in Fall 2014 to improve safety. This project, referred to as the Prunedale Improvement Project (PIP), upgraded the existing four-lane facility to partially access-controlled with construction of 10 miles of median barrier, two new interchanges, and an overcrossing.

Where Are We Today? 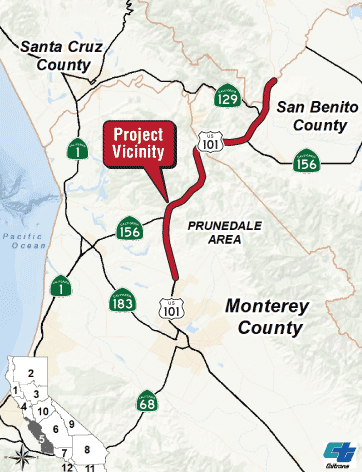 The Prunedale Improvement Project (PIP) eliminated vehicle conflict points associated with turns and crossing movements. The PIP was considered to be Phase 1 of conversion to a full access-controlled freeway. The Prunedale Freeway was envisioned as Phase 2 on either the existing alignment or on the adopted bypass alignment. As of 2019, the Phase 2 project is no longer identified in the Transportation Agency for Monterey County (TAMC) Regional Transportation Plan.

As for the adopted route portion located in San Benito County, there are no local or regional planning studies existing or underway that would have a bearing on existing route adoption. In partnership with TAMC, Caltrans has been developing a review of the route adoption and the consideration of rescinding the route adoption.

The following factors were considered when evaluating the potential for route rescission:

Ultimately, there is little likelihood for any construction to occur on the unconstructed portions of the adopted route; therefore, rescission is appropriate.  Please refer to the approved Route Inventory Report for additional information:

The purpose of a Local Alternative Transportation Improvement Program is to ensure that funds received from the sale of right-of-way purchased for the original route adoption when collected would benefit other local improvements within the region (since the original funds were invested for transportation purposes in that area).