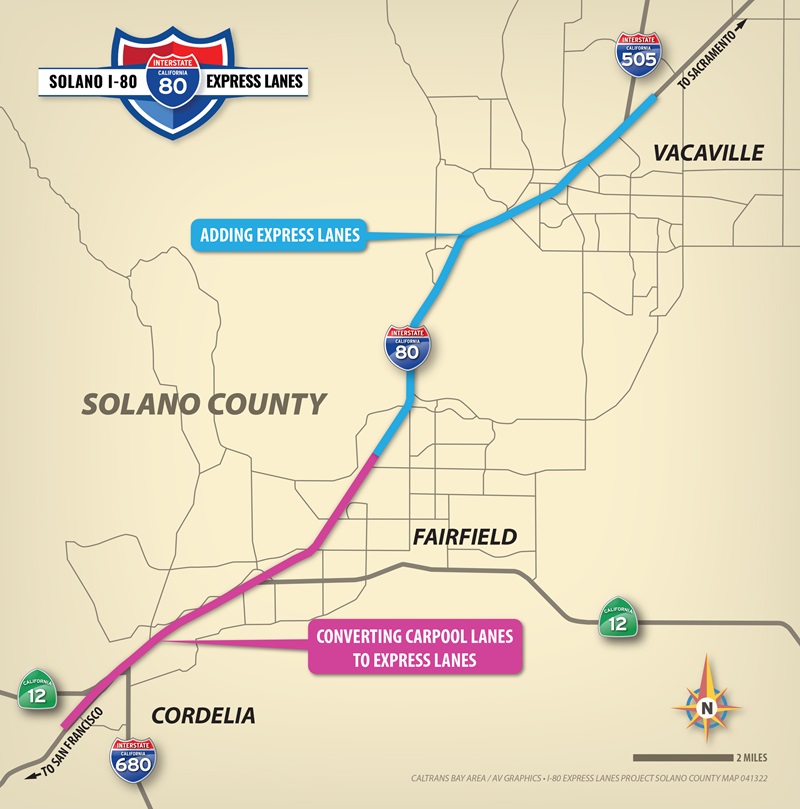 In mid- May, 2022, Caltrans and the Solano Transportation Authority (STA) will break ground on the Solano I-80 Express Lanes project, a three-year $244 million project to add express lanes on Interstate 80 between Red Top Road in Fairfield and the Leisure Town Road in Vacaville just east of the I-80/I-580 Interchange.  Upon completion of the three-year project, two new 18-mile express lanes - one eastbound and one westbound - will be available to motorists traveling through central Solano County, bringing congestion relief and encouraging transit use and carpooling in the busy corridor.

The joined facilities will create two 18-mile-long express lanes that will vastly improve transit travel times, particularly because the stretch between Air Base Parkway and Leisure Town Road is not currently served by carpool lanes.

The project will combat growing traffic congestion in the Fairfield-Vacaville corridor. At Air Base Parkway, the busiest location, about 215,000 vehicles pass through daily.

O.C. Jones is the contractor on the project, working on a stretch of freeway that hasn't been widened since 1973. The project comes at a welcome time, as Solano County rests between two mega regions, the Bay Area and the greater Sacramento area. Traffic is projected to increase by 35 percent by 2040.

However, the opening of new ramps on the ongoing 80/680/12 Project several miles to the west has already provide some congestion relief to the vicinity.  The project will be completed in late fall 2022.

Over half the funding for the project, $123 million, comes from money set-aside by Senate Bill 1 (SB 1), the Road Repair and Accountability Act of 2017.

The New Express Lanes Will:

Like carpool lanes, motorists with three or more occupants are permitted unrestricted access to express lanes. After all, maximizing the occupants in each vehicle is perhaps the best way to reduce traﬃc congestion.

But, unlike carpool lanes, express lanes can be actively managed, meaning the occupancy requirements and the hours of operation can be changed according to circumstances.

Let's say that traﬃc volumes decrease and extra space (capacity) is available in the express lane. Wouldn't it be a good idea to allow a few non-carpoolers into the lane if it didn't slow down the carpoolers?

That's how an express lane diﬀers from a carpool lane: It sells the spare capacity.  By doing so, it siphons traﬃc from the mixed-flow lanes, reducing overall freeway congestion. Carpool lanes lack that flexibility.

In the traffic control center, the operators collect data from roadway sensors and by observation. Then, if the operators wish to change the occupancy requirement of the express lane, they communicate it to motorists through the large electronic message boards that overhang the freeway.

They can also adjust the toll for non-carpoolers, also posting that information of the message board.

Adjusting the traffic flow in the express lanes is done with some finesse - similar to adjusting a dial rather than opening a gate.

No one wants a rush of vehicles merging into the express lane after a change in price or occupancy. That situation is prevented by dialing up and down the tolls to encourage or discourage non-carpoolers from entering the lane.

Of course, the biggest benefit of express lanes is that they increase person throughput by encouraging mass transit and carpooling. However, congestion in all lanes can be reduced  by maximizing the throughput of the express lane through active management. 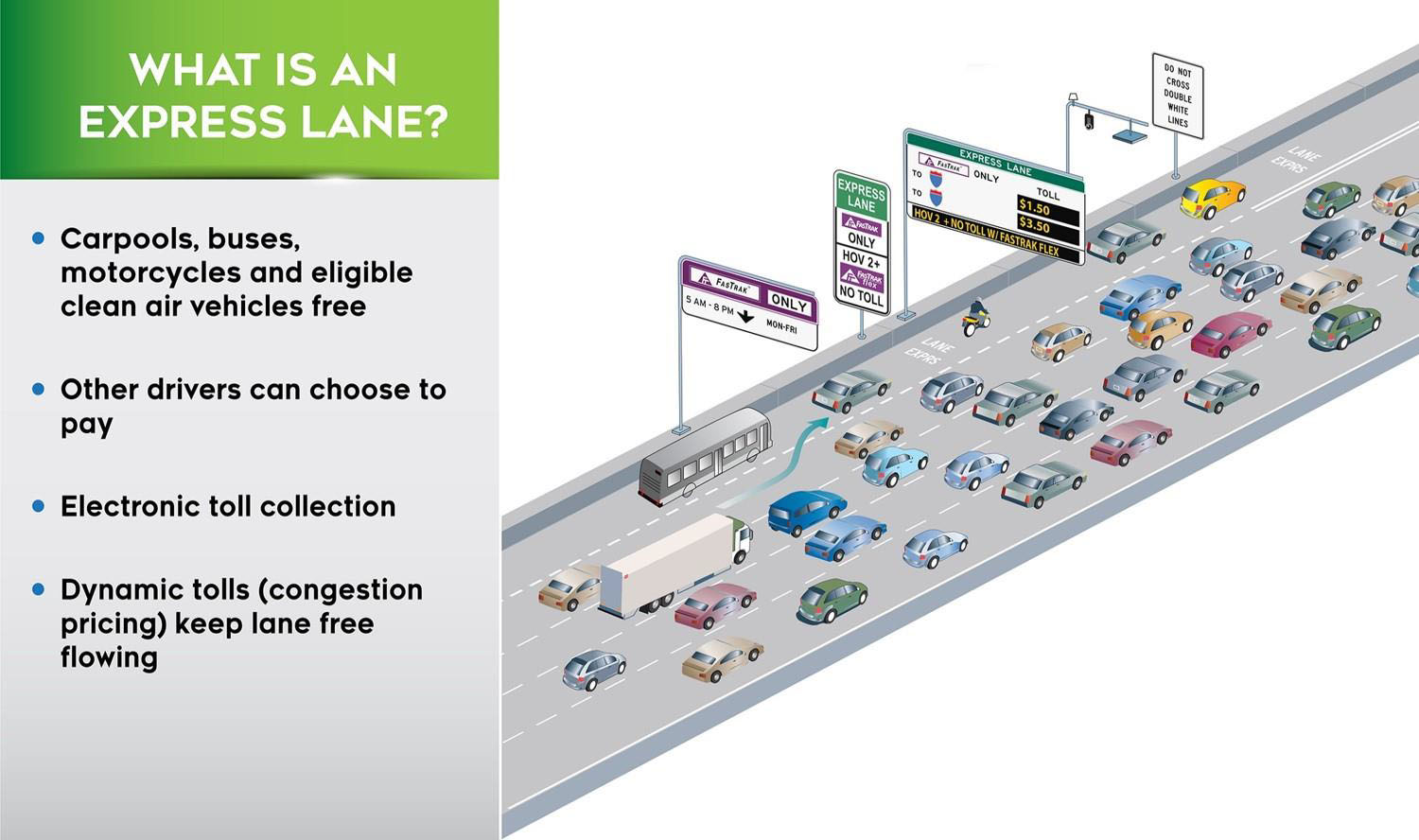