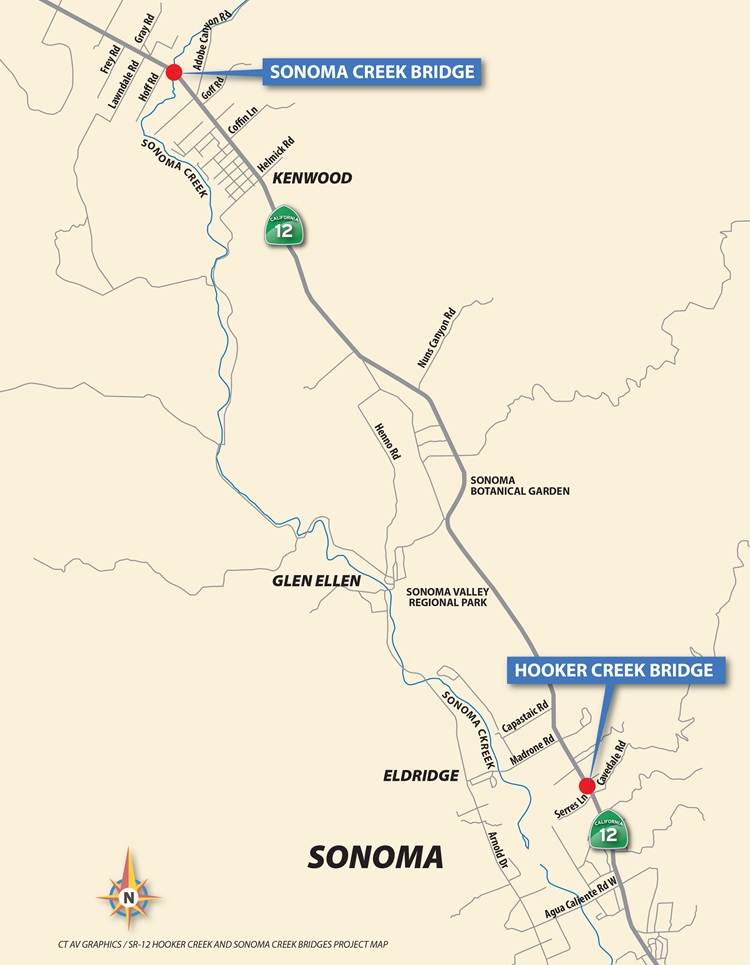 Caltrans will replace two bridges on State Route 12 in Sonoma County during a $13 million, two-year project scheduled to begin in the July/August 2022.

The Hooker Creek Bridge near Agua Caliente and the Sonoma Creek Bridge near Kenwood (not to be confused with a bridge of the same name on Route 37) were built in 1900 and 1922. Decades of rapidly flowing water during rainy winters have eroded the foundations and compromised the bridges' strength.

Highway 12 spans both bridges as a two-lane road – one lane in each direction.

The Hooker Creek Bridge is too old and brittle to be demolished and replaced in sections. To replace the bridge, Caltrans will close Route 12  to through-traffic at Madrone Road and Agua Caliente Road, detouring traffic onto local roads for about 30 days, expected to occur in summer 2023.

Bridge Scour is the Problem

During winter rainstorms, Sonoma and Hooker creeks swell with run-off.  The tranquil waterways of summer and fall can morph into a winter torrent. In a process known as scouring, fast-flowing water strikes bridge columns or abutments, swirling rapidly around the fixed object, creating a vortex that erodes the creek bed and undermines the bridge.

Over the years, the effects of scouring accumulate, weakening the bridge from the bottom upwards. Caltrans considered strengthening the bridges in place, but studies revealed more structural damage than was visible during onsite inspections, leading Caltrans to decide upon replacing the bridges as a better long-term and cost-efficient solution.

The Sonoma Creek Bridge lies at post mile 25.8 between Adobe Canyon Road and Hof Road. The bridge was built in 1922 and widened in 1950 and 1962. The rebuild project will take about two years, starting in July/August 2022.

Caltrans wishes to minimize traffic disruption by completing the first construction stage on the Sonoma Creek Bridge before beginning work on the Hooker Creek Bridge.

During a period of about 45 consecutive days, Caltrans will conduct 24-hour reversing one-way traffic control through the construction zone.

At the Sonoma Creek Bridge, the project would remove the existing 46-ft wide bridge, and replace it with a 55-ft wide precast/pre-stressed type structure. The new structure would be 69 ft. long, replacing the existing bridge of the same length. 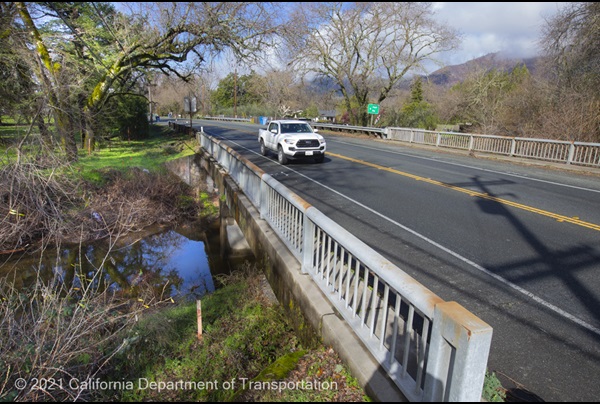 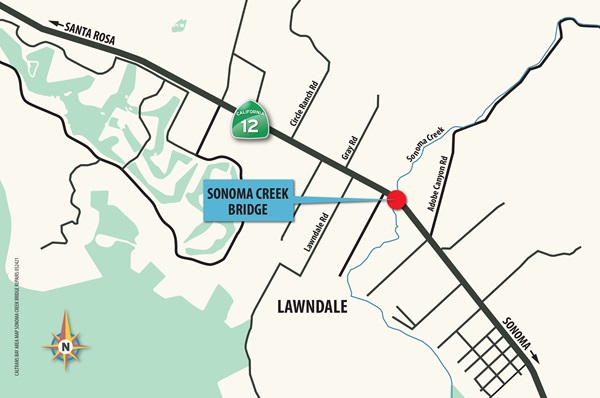 The bridge has not been improved much since being built in 1900. Only guardrail and new pavement have been added over the years. Except for the yellow and black-striped paddle signs, most motorists would have little idea they were traveling over a bridge. The creek itself is often invisible, shrouded by the canopy of nearby trees. Nevertheless, Hooker Creek is an attractive, if humble bridge, a turn of the 20th Century concrete arch structure about 24-feet in length.

At the Hooker Creek Bridge location, the project would remove the existing 36-ft wide bridge and replace it with a 44-ft wide PC/PS slab-type structure. The new structure would be 41.5 ft. long, replacing the existing 24-ft long bridge.

Caltrans will detour traffic around the bridge over county roads for about 30 consecutive days in 2023 to accommodate construction. The new bridge will take about a year to build. 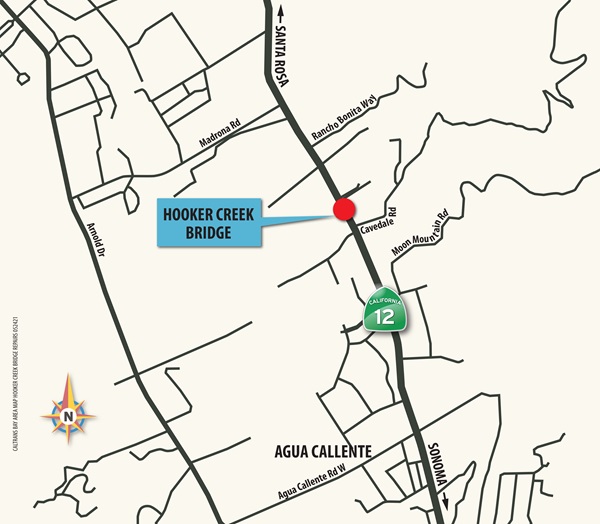 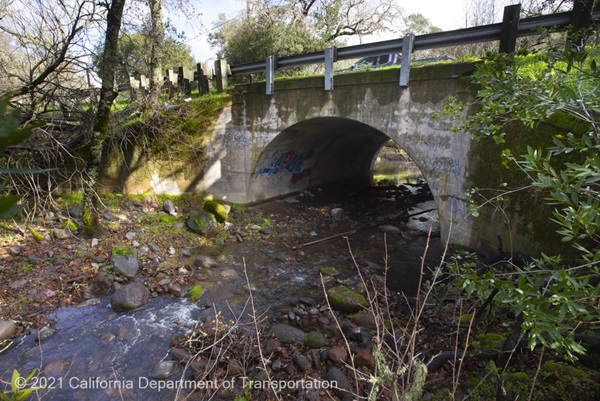 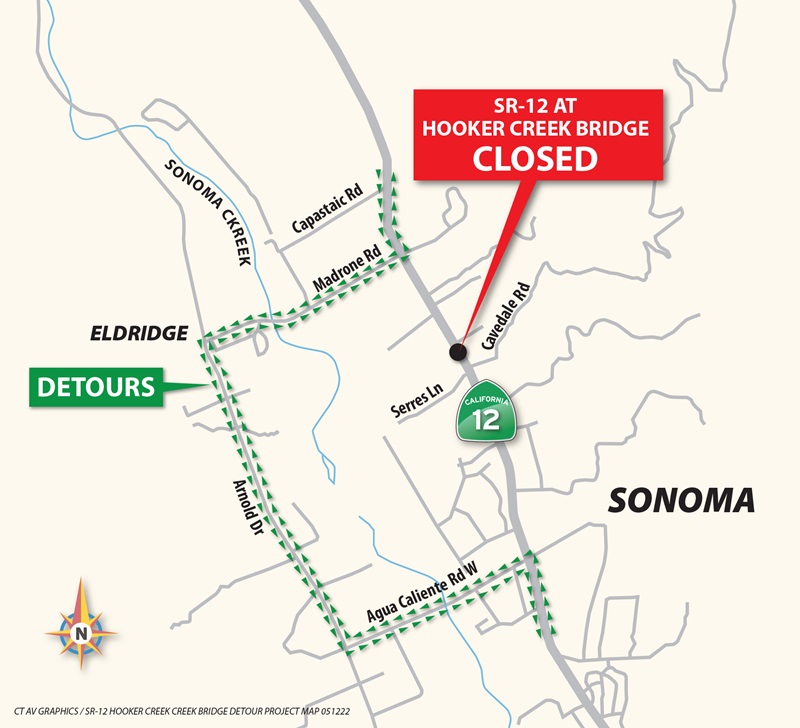