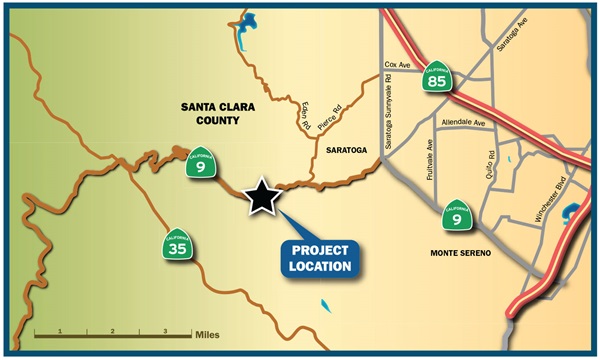 Caltrans has approved the Final Environmental Impact Report/Environmental Assessment (EIR/EA) and Section 4(f) Evaluation for the Saratoga Creek Bridge Project. The bridge is located at post mile 4.9 where State Route (SR-) 9 crosses Sanborn Creek, near the intersection of SR-9 and Sanborn Road. The purpose of the project is to maintain safe and stable connectivity along on SR-9, between the City of Saratoga in Santa Clara County and the community of Felton in Santa Cruz County. The need for this project is due to structural and seismic deficiencies in the existing Saratoga Creek Bridge (Bridge No. 37 0074). The project proposes to address these concerns by constructing a new bridge within the existing bridge in a manner that preserves the historic look of the existing bridge.

A scoping meeting was held on Thursday, April 21, 2016 at the Saratoga Prospect Center. The public comment period for the Scoping Phase concluded on May 20, 2016. Caltrans received feedback from the public and partner agencies during this time that expressed concerns with:

The project development team took these concerns into consideration in refining the development of the project and settled on the following project alternatives:

The project development team studied the potential impacts of each alternative and circulated a Draft Environmental Impact Report (EIR) under the California Environmental Quality Act and an Environmental Assessment (EA) under the National Environmental Policy Act. The public comment period on the Draft EIR/EA began on February 12, 2018 and ended on March 29, 2018.

A public hearing for the Draft EIR/EA was held on February 28, 2018 in the City of Saratoga. It was an open house format with project development team members available to answer questions about this project and informational display boards. A short presentation was also done to introduce the project to the meeting attendees.

After circulation of the Draft EIR/EA and receipt of comments from the public and reviewing agencies, Caltrans reviewed input and incorporated modifications to the project alternatives that addressed recurrent concerns. Numerous comments on the Draft EIR/EA focused on the duration of construction and the loss of the existing bridge’s historic character. These comments and Caltrans’ response to comments can be found in Appendix K of the Final EIR/EA. Based on the input received, the Project Development Team generated the following two alternatives:

The potential impacts for these alternatives were evaluated and neither alternative introduces new significant impacts not previously discussed in the draft document. Both build alternatives have comparable biological impacts since they both require vegetation clearing in the immediate area around the existing bridge and will install a temporary creek crossing/diversion for Sanborn Creek below the intersection of SR-9 and the creek. Additionally, both build alternatives have an adverse effect on the historic designation of the bridge.

After the public comment period, the Project Development Team applied the selection criteria developed during the scoping phase and refined based on the feedback on the Draft EIR/EA. The team prioritized reducing impacts to traffic, construction duration, and historic resources; while also considering impacts to biological resources, visual resources, and project costs.

The Project Development Team has selected Alternative 1.1 Maintain Existing Roadway Alignment with “Hybrid” Bridge as the preferred alternative for this project. The “Hybrid” Alternative was selected as the preferred alternative because it meets the project’s purpose and need of maintaining safe and stable connectivity along SR-9, while also retaining much of the visual aesthetic of the existing structure by avoiding the concealment or removal of the current bridge’s stone masonry walls. This concern was a recurring public comment during circulation of the Draft EIR/EA.

The Final EIR/EA was approved January 28, 2020 by Caltrans. Caltrans has decided to issue a Finding of No Significant Impact (FONSI) for compliance with NEPA. A Notice of Determination (NOD) was published for compliance with CEQA on February 4, 2020 and a Notice of Availability (NOA) of the FONSI has been sent to the affected units of federal, state, and local government, and to the State Clearinghouse in compliance with EO 12372. The Final EIR/EA and Section 4(f) Evaluation with FONSI can be downloaded here.