Hwy 1 Paving in Pacifica: Gray Whale Cove to I-280 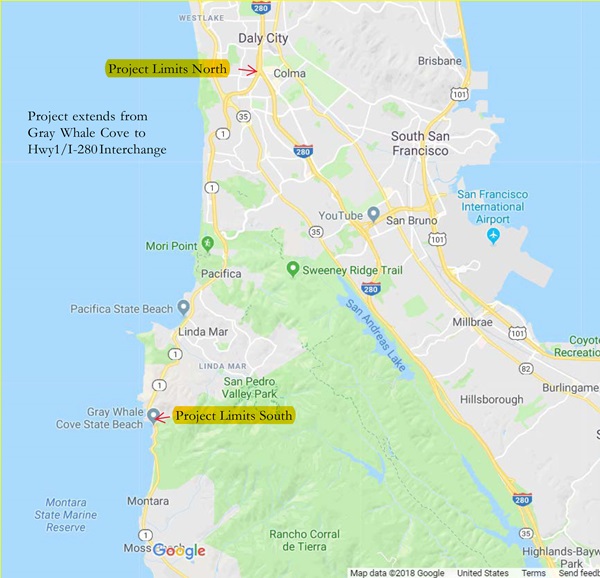 Caltrans has awarded contract to pave a ten-mile stretch of Highway 1 in San Mateo County from Gray Whale Cove to the Highway 1/I-280 Interchange. Most of the project falls within the Pacifica city limits, but small sections at the northern and southern ends lie within Daly City and unincorporated San Mateo County respectively.

The contractor, Granite Construction of Redwood City, is scheduled to begin work in mid-May on a 120 working-day contract, essentially a five-day work week, excluding holidays. If all goes well, paving should be complete by the end of October 2018.

Work crews will pave over 40 lanes miles, grinding away the old pavement and laying down new asphalt. A short section of highway, at the far north end of the project, is composed of concrete and won’t be paved. Instead, the road surface, worn down by years of use, will be regrooved for a quieter, smoother ride.

Most work will be performed at night to minimize impacts on the traveling public.


Over the years, Caltrans has made repairs and paved small segments of in this area. But this is the first end-to-end paving project for this section of Highway 1 in over 20 years.

No large-scale grinding or paving will occur until the last week of May.

Week of May 20 - Digouts, repair of areas where sub-base of the road has eroded.

Week of May 27 - Grinding and paving, starting at Route 35, working southbound to just past Manor Drive.

Caltrans seeks to produce a current and reliable schedule. Of course, paving work has many variables so the schedule is subject to change. Naturally, it’s easier to predict the upcoming week than subsequent weeks. That said, Caltrans meets weekly with the contractor and will use that information to update the schedule on a regular basis.

Caltrans has placed changeable message signs (CMS signs), portable signs with black backgrounds and orange lettering, along Highway 1 and I-280 to apprise motorists of the upcoming paving project:

This week the contractor will install temporary concrete barriers (K-rail) in at locations on the corridor. Some barriers will serve to protect workers, others will keep endangered species, particularly the red-legged frog and San Francisco garter snake from meandering onto the highway.

Also, the contractor will be placing sandbags around storm drains to prevent the runoff of pollutants.

Next week, the contractor does “digouts.” The word is both a noun and a verb, referring to areas of failing, slumping pavement or the process of repairing such areas. Digouts are areas where the pavement requires more repair than grinding and paving. Slumping pavement indicates erosion of the gravel and soil beneath the pavement, requiring their excavation and replacement of these materials.

The following week is the initiation of large-scale grinding and paving Most likely the contractor will start on the north end at the junction of Route 35 and work south to Manor Drive.