State Route 37 is recognized as the North Bay’s most heavily used east/west highway serving commuters and visitors. The roadway experiences significant travel delay and is also impacted by uneven subsidence and intermittent storm-related flooding in several areas. Nearly the entire length between Novato and Vallejo is predicted to become permanently submerged as sea levels rise if modifications are not made. The result would be additional traffic on distant roadways that are not equipped to handle it, economic loss and reduced opportunity for disadvantaged Solano community residents who commute from to Marin and Sonoma counties.

Much of the route traverses one of the Bay Area‘s largest remaining tidal marsh environments, known as the San Pablo Bay lands.  Federal and state agencies, as well as numerous non-profit environmental conservation organizations, have invested concerted effort on ecosystem planning, wetland acquisition, and habitat restoration for over three decades, guided since 1999 bythe comprehensive science-based Baylands Ecosystem Habitat Goals Report and its 2015 update.To address these concerns, in 2012 Caltrans contracted with the University of California/ Davisto prepare a Highway 37 Stewardship Study, followed in 2016 by the Route 37 Integrated Traffic Infrastructure, and Sea Level Rise Analysis. In 2015, Caltrans issued anSR37 Transportation Concept Report, further refining understanding on a range of issues.State Route 37 (SR 37) traverses through Sonoma, Marin, and Solano counties in highly sensitive marshland in the northern portions of the San Francisco Bay wetlands. 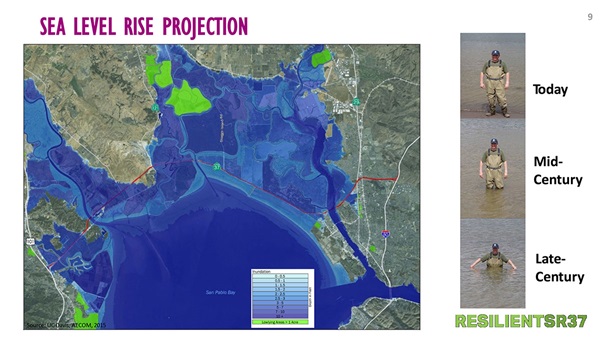 The 21-mile corridor is an important regional connection linking the east and west portions of the North Bay Area by connecting I-80 and SR 101. Portions of SR 37 are highly congested during weekday commute periods but also on the weekends. The corridor is heavily traveled on the weekends by recreational travelers visiting the wine country in both the Napa and Sonoma valleys. Portions of the corridor between SR 121 and Mare Island experience large amounts of delay due to the highway narrowing down from four to two lanes. Marin, Napa, Sonoma and Solano counties have been actively participating in a joint analysis conducted by Caltrans and UC Davis Road Ecology Center identifying SR 37 corridor’s vulnerability to sea level rise.

Early conclusions have identified portions of SR 37 that will be completely inundated by 2050, as well as increased flooding events along several sections of the corridor leading up to 2050. The threat of sea-level rise coupled with the growing congestion issues on SR 37 makes it a priority corridor for all four North Bay counties.  Recognizing that something must be done, all four North Bay counties have agreed to partner in planning near and long term solutions for the corridor. 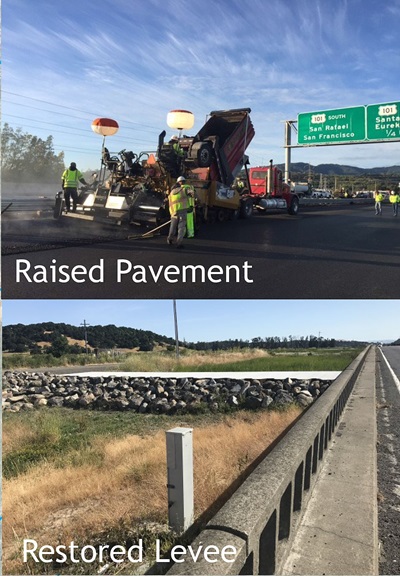 In December 2015, a Memorandum of Understanding (MOU) was signed by all four North Bay County Transportation Authorities “…to develop an expedited funding, financing and project implementation strategy for the reconstruction of SR 37 to withstand rising seas and storm surges while improving mobility and safety along the route”.