The scope of the proposed project includes: grinding existing pavement and inlay ruts with polyester concrete, repairing and replacing jointed plain concrete pavement (JPCP), adding new concrete side gutters along the outside shoulders of the West Truckee westbound on-ramp and the eastbound off-ramp, rehabilitating drainage culverts in poor condition, and upgrading existing traffic monitoring station (TMS) elements to current standards along this segment. Work also includes removing and replacing the damaged concrete walkways and replacing non-Americans with Disabilities Act (ADA) ramps at the State Route 89/Interstate 80 interchange, the West Truckee eastbound of-ramp and the westbound on-ramp. The scope also includes the addition of westbound Auxiliary lanes from the State Route 89 on-ramp to Donner Pass Road off-ramp and from the 80/267/89 on-ramp to the Route 80/267/89 separation. Acceleration Lanes are also included in the eastbound direction at the Donner Park Overcrossing on-ramp and State Route 89 on-ramp. 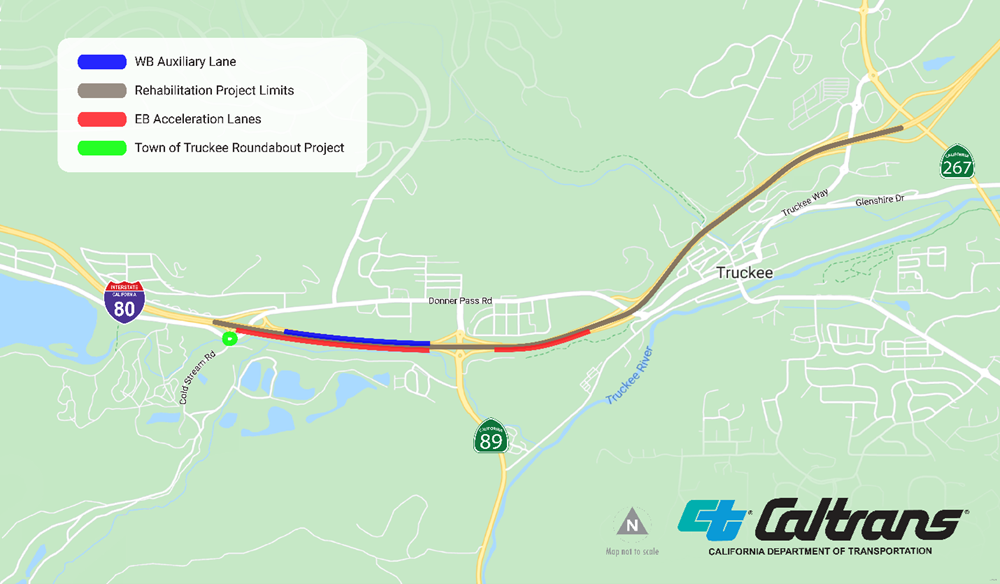 The #2 lane in the eastbound (EB) direction and the #3 lane in the westbound (WB) direction show moderate to severe rutting along the wheel path due to chain wear from heavy truck traffic and snow removal equipment. Existing drainage culverts that are in poor condition and that have reached the end of their service life will be replaced.

There is also the combination of slow-moving trucks and higher speed vehicular traffic on this segment of I-80 which cause merge conflicts and collisions when local/regional traffic attempt to merge onto I-80 from ramps on inclines with short merges.

05.19.22 Lane Reductions Ahead for I-80 Rehabilitation Project in Truckee

05.13.22 Travel Delays Expected on I-80 in Truckee for Construction Project