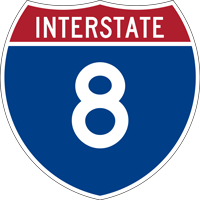 SAN DIEGO — Construction crews will begin pavement work on a 10-mile section of eastbound Interstate 8 (I-8) from Viejas Creek to just west of Pine Valley Creek Bridge later in the month through early 2024.

Work on the Eastbound I-8 Pine Valley Pavement Project will require reducing eastbound I-8 to one lane. Ramps within the construction zone will be temporarily closed as needed for paving operations.

The Vista Point east of East Willow Road will be completely closed for the duration of the project. The eastbound I-8 bicycle lane will also be closed during the project for the safety of bicyclists, drivers, and highway workers.

There will be nighttime closures to put up concrete barriers, also known as k-rail, then most of the work will be weekdays behind the k-rail.

The Eastbound I-8 Pine Valley Pavement Project from Viejas Creek Road to State Route 79 (SR-79) will replace the right lane and outside shoulder with Continuously Reinforced Concrete Pavement (CRCP) and the left shoulder with hot mixed Asphalt as well as install drainage improvements. CRCP is a process of placing steel reinforcing bars within the concrete along the entire length of the lanes. The resulting pavement is smoother and expected to last up to 70 years which means a better driver experience with less maintenance time and cost. Another benefit is improved safety for highway workers who would otherwise be exposed to live traffic.

The portion of the project from SR-79 to just west of Pine Valley Creek Bridge will replace the right two lanes and right shoulder with CRCP. The work includes replacing/upgrading guard rails and repairing bridge rails on five bridges. The estimated total project cost is $46.8 million funded by state and federal sources.