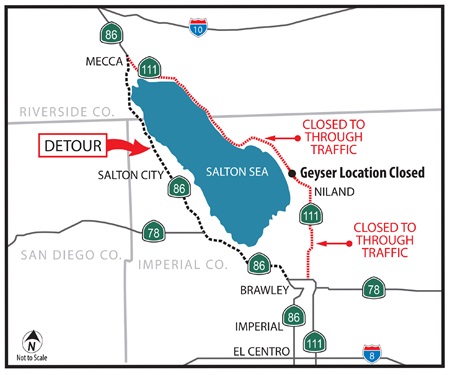 EL CENTRO, Calif. — A full closure of State Route 111 (SR-111) at Davis and Gillespie roads, about five miles northwest of Niland in Imperial County is expected to begin Friday, September 27, after 5 p.m., according to Caltrans. The closure could be in place up to two weeks.

Because this is a stretch of highway without easily-accessible parallel roads, general traffic will be detoured from the north and south of SR-111 to the west side of the Salton Sea along State Route 86. See the below map.

Motorists are advised to plan for extended travel times along the detour.

The work is part of an emergency project to mitigate a natural-occurring geyser that has existed since 1953. The geyser has been moving towards SR-111 since 2016.

The geyser/mud pot is releasing water, carbon dioxide and hydrogen sulfide gases in low concentrations and does not pose a health hazard from a distance. In the past 11 years, the geyser has moved slowly; however, the rate of movement has increased, and the geyser has already encroached the railroad right of way impacting Union Pacific Railroad tracks.

Caltrans is coordinating with local, state, and other partners for this mitigation and is now implementing this emergency project to expedite the work. For safety reasons, there is no access to the mud pot and public site visits are prohibited.

Caltrans staff thanks community members and motorists for their patience for any delays and inconvenience during construction.

The work schedule is subject to change due to traffic incidents, weather, availability of equipment and materials, or construction-related issues.