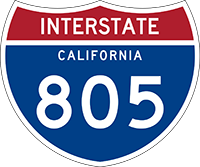 SAN DIEGO — Construction crews will close all main lanes of northbound and southbound Interstate 805 (I-805) from Interstate 5 (I-5) to Mira Mesa Boulevard for four consecutive nights beginning Monday, according to Caltrans. The nighttime closures will take place at 11 until 5 in the morning for pavement work.

Signs will be posted directing motorists to use the single High Occupancy Vehicle Lane to the left of the lane closures.

Traffic volumes are typically lower during the nighttime hours and no travel delays are expected.

The I-805 Pavement Rehabilitation Project will repair and restore a two-mile section of I-805 from Mira Mesa Boulevard to just north of the Interstate 5/805 separation. The work includes replacing damaged concrete slabs, smoothing the roadway and installing new guardrail. Construction began in February and is expected to be completed by the end of the year.

Drivers in the area are reminded to watch for highway workers and construction equipment and to ‘Be Work Zone Alert.’

The work schedule is subject to change due to traffic incidents, weather, availability of equipment and materials or construction-related issues. More information and updates on projects can be found at http://www.dot.ca.gov/d11/projects/ or on Twitter via @SDCaltrans.

This $5.5 million project is made possible by allocations from the Senate Bill 1 (SB 1), the Road Repair and Accountability Act of 2017. SB 1 invests approximately $5.4 billion per year to fix roads, freeways and bridges in communities across California as well as strategically investing in transit. These funds are split equally between state and local projects and will allow Caltrans to fix more than 17,000 lane miles of pavement, 500 bridges and 55,000 culverts on the state highway system by 2027.

Caltrans is committed to conducting its business in a fully transparent manner and detailing its progress to the public. For complete details on SB 1, visit http://www.rebuildingca.ca.gov/.