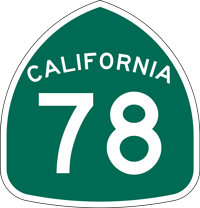 SAN DIEGO — Crews are preparing to close a six-mile segment of State Route 78 (SR-78) from Wynola Road just east of Julian to Great Southern Overland Stage Route (S-2) later this afternoon for rock scaling activities, according to Caltrans. The emergency closure may extend through the weekend as needed to ensure that the highway slopes are stable.

Residents will be allowed access through the closures as safe to do so.

Motorists on eastbound SR-78 from Ramona toward Banner grade will be detoured onto northbound SR-79 at Santa Ysabel, then directed to turn right onto San Felipe Road (S-2), to eastbound SR-78 towards Ocotillo Wells.

Motorists on westbound SR-78, east of the closure, will be detoured to turn right onto San Felipe Road (S-2) to southbound SR-79, to Santa Ysabel to westbound or eastbound SR-78.

Caltrans inspected the highway slopes and determined that rock scaling is needed to remove loose soil and rocks.

Caltrans will provide further updates about traffic impacts as they become available.