Caltrans also proposes to decommission and dispose of existing double-walled aboveground storage tanks (ASTs) used for diesel fuel storage and replace them with new dual gasoline/diesel double-walled tanks (6,000 gallons diesel/4,000 gallons gasoline). Improvements may require the installation of new concrete foundations and/or pipe guard posts within the existing sites. As part of this work, minor excavation resulting in up to approximately 40 cubic yards of soil per site may occur. Surplus soil may be reused within the maintenance station facilities or disposed offsite if necessary. At the Carlsbad Maintenance Station additional work includes replacing asphalt concrete surfacing and installing concrete pads (6" thick). Work will occur in existing Caltrans right-of-way within developed, existing maintenance stations. No work will occur outside current maintenance station boundaries and construction work will comply with local, state, and/or federal regulations. Work at each site will consist of up to ten days for the four locations. Operations and maintenance post-project will be similar to current conditions.

The IS/MND is available for review and copying at the Caltrans District 11 Office at 4050 Taylor Street, San Diego, CA 92110 between December 29, 2021 to January 28, 2022 at Routine Maintenance for Four Maintenance Stations with Fuel Tank Upgrades Project.

If there are no major comments or requests for a public meeting, Caltrans will proceed with the project’s design.

For more information about this project or the IS/MND, please contact Emery McCaffery, Associate Environmental Planner, at (858) 289-1270 or email emery.mccaffery@dot.ca.gov. 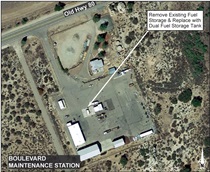 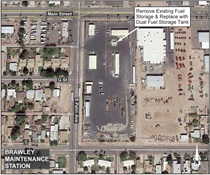 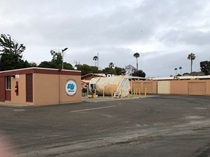