For information about the Thursday, October 7, 2021 Virtual Public Meeting, please see below or click the following link:

The California Department of Transportation (Caltrans), in cooperation with the San Joaquin Council of Governments, proposes to install managed lanes on Interstate 205 through the City of Tracy, accommodate transit hubs, and improve interchanges between post mile R1.7 on Interstate 580 and post mile R13.5 on Interstate 5. The project limits extend from the Interstate 580 and the West Grant Line Road interchange in Alameda County to the Interstate 205 and the Interstate 5 interchange in San Joaquin County. Managed lanes are highway lanes that are actively managed to respond to an area’s rapid growth. Interstate 205 in the City of Tracy has been identified as an area of heavy congestion, resulting from high truck volumes and commuters that travel to and from the Bay Area. Examples of managed lanes being considered for the proposed project include high-occupancy vehicle lanes, transit lanes, and express (or toll) lanes.

Each Build Alternative may include detention or retention basins, access roads, and up to four transit hubs. Transit hub features may include park-and-ride lots, electric vehicle charging stations, and bus and train stops. Locations for transit hubs would be determined in coordination with stakeholders, which would include but would not be limited to the following: Federal Highway Administration, Caltrans, Valley Link, San Joaquin Council of Governments, City of Tracy, Community of Mountain House, Alameda County, San Joaquin County, local transit, and the interested public. The transit hubs would be located to improve access to the transit facility and avoid precluding connectivity to local communities. The proposed project could build facilities within the right-of-way, such as rail stops, to accommodate connection to the corridor, but may or may not build the actual transit hubs. 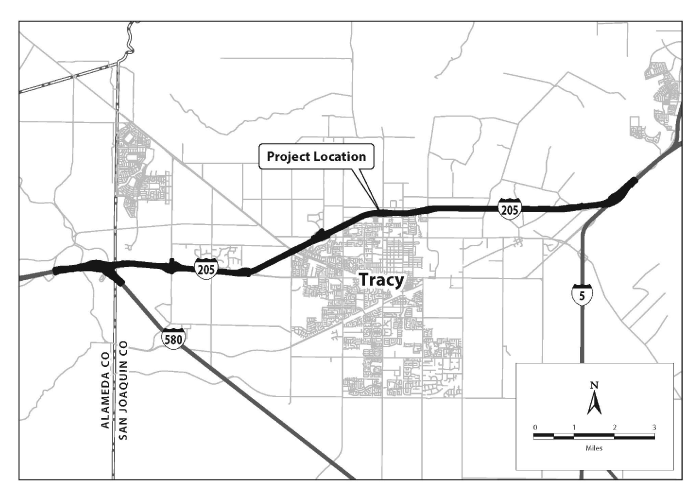 The proposed project has the following main purposes:

The proposed project is needed to address the following concerns:

A virtual scoping meeting will be held on October 7, 2021, between 6:00 pm and 8:00 pm online. A presentation will be given and there will be an opportunity to speak with the project team. Please visit the project website at https://205managedlanes.com to access the link for the meeting.