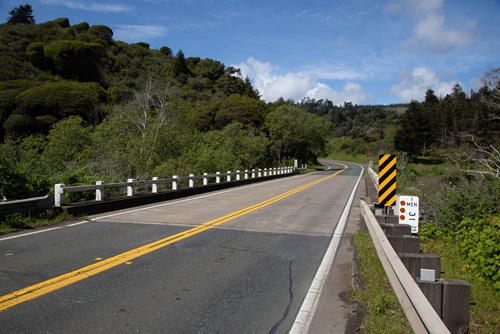 The bridge and approach roadway have geometric and structural deficiencies, which have the potential to interrupt traffic resulting from traffic collisions, seismic event, or other catastrophic failure. These deficiencies include narrow shoulder widths that do not provide sufficient area for disabled vehicles or appropriate access for pedestrians and bicyclists crossing the bridge; existing bridge railing that does not meet current safety standards; and raised concrete areas adjacent to the shoulders that are not compliant with the Americans with Disabilities Act (ADA).

The bridge is scour critical. A scour critical bridge is one with abutment or pier foundations that are rated as unstable due to (1) observed scour at the bridge site or (2) a scour potential as determined from a scour evaluation study. Caltrans performed an inspection at Elk Creek Bridge in March 2016 that revealed significant scour is occurring on both sides of the channel at Pier 2, Pier 3, and along the concrete slope paving at Abutment 4. Subsequent storms have exacerbated the scour issue and resulted in emergency repairs on the adjacent slopes.

The purpose of the proposed project is to improve the function and geometrics of the Elk Creek Bridge and approach roadway to ensure uninterrupted traffic movement in the event of a collision or emergency incident, seismic event or other catastrophic failure, and to provide improved access for pedestrians and bicyclists across the bridge.

The project proposes to replace Elk Creek Bridge with a 140-foot long cast-in-place/prestressed (CIP/PS) Concrete box girder with 12-foot lanes, 6-foot shoulders, and a 6-foot separated pedestrian and bicycle walkway on the west side of the bridge.

Roadway approaches would be widened and reconstructed to conform from the proposed bridge to the profile of the existing roadway. Approaches will be widened from 11- foot lanes to 12-foot lanes, shoulders varying from 2 to 6 feet and a 6-foot separated pedestrian and bicycle walkway at the bridge conform. Road improvements also includes installation of Midwest Guardrail System (steel post), vegetation control (minor concrete), crash cushions and roadside ditches.