Caltrans and our partners have many plans and ideas to improve Broadway in Eureka, and we will test some of those ideas soon.

Caltrans District 1 will be holding pop-up demonstrations along the Broadway portion of U.S. 101 in Eureka. These test demonstrations will include the temporary installation of materials like vertical cone-like delineators and paint to analyze proposed improvements before possible construction.

The projects are intended to enhance safety for all road users, improve connections to local roads, improve transit access for pedestrians and cyclists, and make walking and bicycling a more enjoyable experience on Broadway. The Broadway Pop-Up Demonstrations will allow Caltrans to understand potential impacts of these improvements on all road users, receive feedback from stakeholders and community members, and make adjustments to project designs before permanent construction.

Both the Broadway Pop-Up Demonstrations and permanent improvements are being planned and designed in close coordination with our partners, including the City of Eureka, Humboldt Transit Authority, Humboldt Bay Fire, Humboldt County Association of Governments, and with the input of numerous community-based organizations.

The Broadway Pop-Up Demonstrations are tentatively planned for May 2023.

Broadway Pop-Up Demonstrations will include the following features:

These features are being evaluated in a temporary condition to inform project designs and implement the vision laid out in the Broadway Multimodal Corridor Plan.

Check out the District 1 Current Projects page for more information on these and other Caltrans projects. 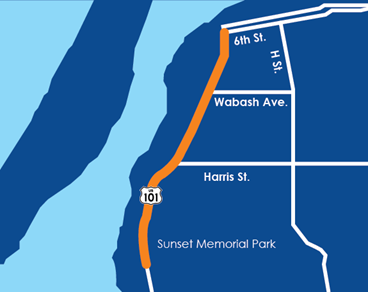 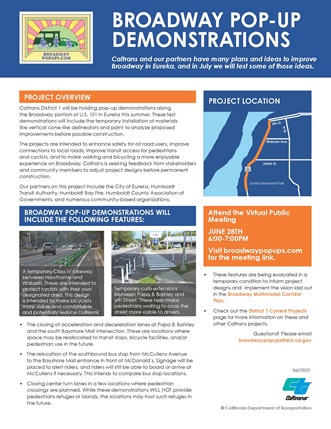 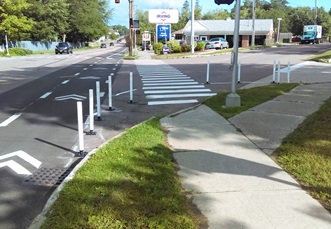 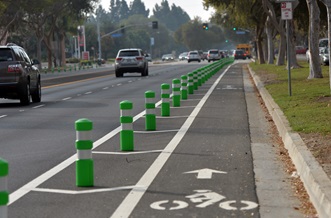