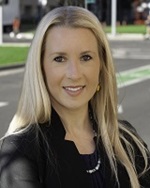 Rachel A. Carpenter was appointed the California Department of Transportation (Caltrans) first-ever Chief Safety Officer effective January 2020. She is the Department’s highest-level subject matter expert on safety practices and policies, and manages the day-to-day operations of the newly established Division of Safety Programs.

Prior to this position, Ms. Carpenter served as Caltrans' Pedestrian and Bicycle Safety Branch Chief, where she envisioned and established the Caltrans’ Pedestrian and Bicyclist Safety Program. Most recently, she was on an assignment with the California State Transportation Agency (CalSTA) as the project manager for the Zero Traffic Fatalities Task Force (pursuant to Assembly Bill 2363). As part of this role, she managed a 24-member task force of state and external agencies and led the development of the final report of findings for the California Legislature on strategies to reduce traffic fatalities to zero.

Before joining Caltrans, Ms. Carpenter worked with the San Francisco Municipal Transportation Agency’s Livable Streets Subdivision where she was a project manager and design engineer for multiple bicyclist safety, pedestrian safety and traffic calming projects. She began her career as a staff engineer with TechLaw Inc. working on hazardous material remediation projects.

Ms. Carpenter is a member of the Transportation Research Board (TRB) Committee on Bicycle Transportation and earned the Caltrans Superior Accomplishment Award in recognition of her nationally leading work on safety-related research. She was awarded the University of California Institute of Transportation Studies Davis Outstanding Master's Thesis Award and presented her research at the 2010 and 2011 TRB Annual Meetings in Washington D.C.

Ms. Carpenter holds bachelor’s and master’s of science degrees in civil engineering (and a minor in music) and she is a licensed professional civil engineer in California. She volunteers as a city of Sacramento Active Transportation Commission member because she believes in the importance of being engaged in the community where she lives.