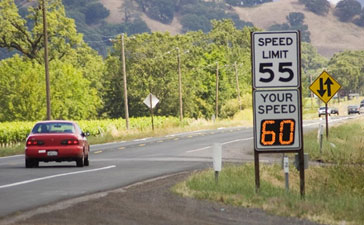 Speed limits establish a reasonable and safe operating speed for a specific section of roadway.

Speed limits are established by an E&TS, by considering the following:

Other factors that may be considered while developing E&TS are, business or residential density, pedestrian and bicyclist safety.

The most widely accepted method of determining the posted speed limit is to set the speed limit at what is called the “85th percentile speed”, which is the speed at or below which 85 percent of the traffic is moving.

The 85th percentile speed is the single most influential indicator of what is safe and reasonable, and it is used to determine the speed limit by rounding to the nearest 5 mph increment, and posting the speed limit at that speed.  If there are sufficient conditions not readily apparent to the driver, as determined by a registered engineer, the posted speed limit can be lowered by 5 mph, and such a decision must be clearly documented in the E&TS.

More information on speed limits can be found below: