This section covers concrete pavement including:

This section covers mostly onsite inspection duties. For information on producing and transporting concrete, refer to Section 4-90, “Concrete,” of this manual.


Curing of beams: Initial curing, final curing for acceptance, and field curing for traffic opening are described in the following paragraphs.

Initial Curing: Store standard-cured specimens for as long as 48 hours after molding, while maintaining the temperature and moisture conditions specified in ASTM C31, Section 10.1.2.1.

Temperature range varies according to the specified concrete strength, as summarized in ASTM C31, Section 10.1.2.1.


A satisfactory temperature environment can be created during the initial curing of the specimens by one or more of the following procedures: (1) use of ventilation; (2) use of ice; (3) use of cooling devices; or (4) use of heating devices, such as electrical resistance heaters or light bulbs. Other suitable methods may be used if the temperature requirements are met.

Within 30 minutes of removing the specimens from their molds, cure specimens with free water maintained on their surfaces at all times at a temperature range of 70-77 degrees Fahrenheit using water storage tanks or moist rooms complying with the requirements of ASTM C511, “Standard Specification for Mixing Rooms, Moist Cabinets, Moist Rooms, and Water Storage Tanks Used in the Testing of Hydraulic Cements and Concretes.”

Beams must be stored in water saturated with calcium hydroxide at 70-77 degrees Fahrenheit at least 20 hours before testing. Drying of the surfaces of the beam shall be prevented between removal from water storage and completion of testing.

Field Curing for Traffic Opening: As nearly as practicable, cure beams in the same manner as the concrete in the pavement. To meet these conditions, specimens made for the purpose of determining when the pavement may be open to traffic must be removed from the molds 44-52 hours after molding. Store specimens representing pavement by placing them on the ground as molded, with their top surfaces up. Bank the sides and ends of the specimens with earth or sand that must be kept damp, leaving the top surfaces exposed to the specified curing treatment. Store concrete pavement specimens as near as possible to the pavement they represent. Provide these specimens with the same temperature protection and moisture environment as the concrete pavement they are representing. At the end of the curing period, leave the specimens in place, exposed to the weather in the same manner as the concrete pavement. Remove all beam specimens from field storage and store in water saturated with calcium hydroxide at 70-77 degrees Fahrenheit for 20-28 hours immediately before time of testing to assure uniform moisture condition.

Use the following procedure for determining pavement thickness and any applicable deductions:

Do the following to locate primary cores:

Locate the first core in any primary unit by starting at either end of the unit (preferably proceeding in the direction of increasing stations), and select a lane at random. Select any factor from the longitudinal factors shown in Table 4-40.1, “Calculation Factors to Locate Cores,” in this manual and multiply the factor by the primary coring interval. The result is the distance from the beginning of the primary unit to the first core. (Any random method of selecting the longitudinal location of the first core is within the intent of the specification.) Determine the lateral location of the first core by selecting a value from the lateral column shown in Table 4-40.1, and measuring that distance from the right-hand edge (when looking ahead) of the lane selected.

To determine the limits of secondary units, locate cores in approximately the center of each adjacent panel. Note that for continuously reinforced concrete pavements, panel lengths are defined as 15 feet for this purpose.

Take these steps when calculating deductions based on deficient thickness:

When no primary cores are deficient in thickness by more than 0.05 foot, make an adjustment as follows:

To determine the primary unit deduction, multiply the primary unit area, excluding any secondary unit areas, by the appropriate factor (if any) in the table titled “Deduction for Thickness Deficiency” within Section 40-1.01D(8)(c)(iv), “Thickness,” of the Standard Specifications.

To determine the total deduction, add the deductions for primary units and the cost of all secondary cores, including those taken outside secondary unit areas.

Following is an example illustrating the procedure for measuring the pavement for thickness and calculating deductions for thickness deficiencies. The procedures and the dollar figures used for deductions from payments to the contractor used in the example are based on Section 40-1.01D(8)(c)(iv).

The engineer calculated the number of cores required for thickness measurements in the primary unit (8,400/1,200 = 7) and the core interval (6,300/7 = 900). To determine the location of the first core, the engineer chose the outside lane (4), at random and used the seventh set of numbers at random, from Table 4-40.1, “Calculation Factors to Locate Cores.” The first core was taken at a longitudinal distance of 360 feet from the beginning and at a lateral distance of 4 feet from the right edge of the lane. Subsequent cores were taken at a core interval of 900 feet, excluding skip areas, proceeding from lane 4 to lane 1. Figure 4-40.1, “Primary Cores,” illustrates the primary unit and the locations of all the primary cores.

The core thickness variations for the respective numbered cores were determined as follows: 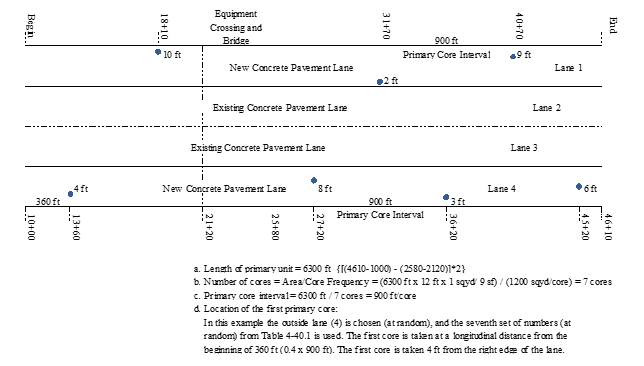 Core 3 is more than 0.02 foot greater than the specified thickness, so + 0.02 foot was used in the calculation to determine thickness deficiency in the primary unit in accordance with Section 40-1.01D(8)(c)(iv), “Thickness,” of the Standard Specifications.

Core 7 was deficient by more than 0.05 foot. Because of this deficiency, the next step was to determine the dimensions of the secondary unit from secondary thickness measurements.

The panels in the secondary unit area represented by cores 7, 7a-1, 7a-2 and 7b-1 were measured and found to be 54 feet in length and represent 72 square yards.

The remaining area of the primary unit, after the area of the secondary unit was subtracted, was as follows:

The deduction from payment to the contractor for thickness deficiency in the primary area in accordance with Section 40-1.01D(8)(c)(iv), “Thickness,” of the Standard Specifications was calculated as follows:

Do not grant permission to a request from the contractor for selective coring. However, if the contractor requests additional thickness measurements before the performance of any of the primary coring, you may shorten the length of the coring interval for the primary unit accordingly. For example, the contractor may request a rate of one core for each 600 feet of traffic lane rather than one core for each 900 feet. The request will have the effect of increasing, not necessarily doubling the number of cores.

If a contractor requests more than one round of additional cores, consult with the construction field coordinator before granting permission.

Skips, (such as gaps left for traffic or equipment crossing, short distances between adjacent bridges, and secondary areas to be removed and replaced), are ultimately poured at a later date. The net area of such pavement placed in any one day technically becomes a primary unit area and, as such, is subject to the specifications regarding thickness measurements. Use judgment regarding which of these areas warrant thickness coring. In general, any area excluded from final coring should be small, and you must have other measurements to confirm that the thickness of the pavement is not deficient.

When you have specific knowledge of areas deficient in thickness and you have records of the extent of such deficiency, exclude these areas from the random coring. Make the deficiency adjustment on the average thickness deficiency in the same manner as for areas that have been cored.

After measuring and recording pavement thickness, retain the cores until final agreement is reached on payment for the concrete pavement, usually after the contractor returns the proposed final estimate.

The personnel who measure core thickness prepare the coring records, which include information about core location (include sketches) and measured thickness. The original records and one copy are given to the resident engineer, who retains the original and forwards the copy to the contractor. Personnel from the district materials laboratory will keep one copy; another copy goes to METS in Sacramento.

Separate reports should be prepared and identified for secondary area measurements. These reports will help determine the cost to the contractor for secondary coring and provide a clear record of secondary areas. Follow the same distribution of copies described in the previous paragraph for primary unit reports.

Coring for determining acceptance of dowel bars and tie bar placement is to be conducted in a similar manner as that of thickness, except use revised lot sizes based on the specified frequencies. If dowel or tie bars are placed outside the specified tolerances, or cores show air voids around the bars, obtain additional cores to determine the limits of unacceptable work. Determine the areas that will require removal as specified in Section 40-1.03N, “Correcting Noncompliant Pavement Work,” and Section 40-4.03B, “Correcting Noncompliant Pavement Work,” of the Standard Specifications.

Guidance for quality control activities included in this section is summarized as follows:

Using the dimensions shown on the plans, calculate the quantity of concrete pavement to be paid for. Use curve corrections to make sure that calculations account for curves in alignment.

Chapter 9 - Projects Sponsored by Others