San Diego — Construction began Thursday in rural San Diego County on the first leg of the 10,000-mile broadband network aimed at bringing high-speed internet services to all Californians so they can access emergency information, telehealth services, education, and employment.

“California is now one step closer to making the digital divide a thing of the past. We’re starting construction today to get affordable high-speed internet in every California home because livelihoods depend on access to a reliable and fast internet connection. This is about ensuring that all Californians, no matter the zip code they call home, can be part of the Golden State’s thriving and diverse economy.” 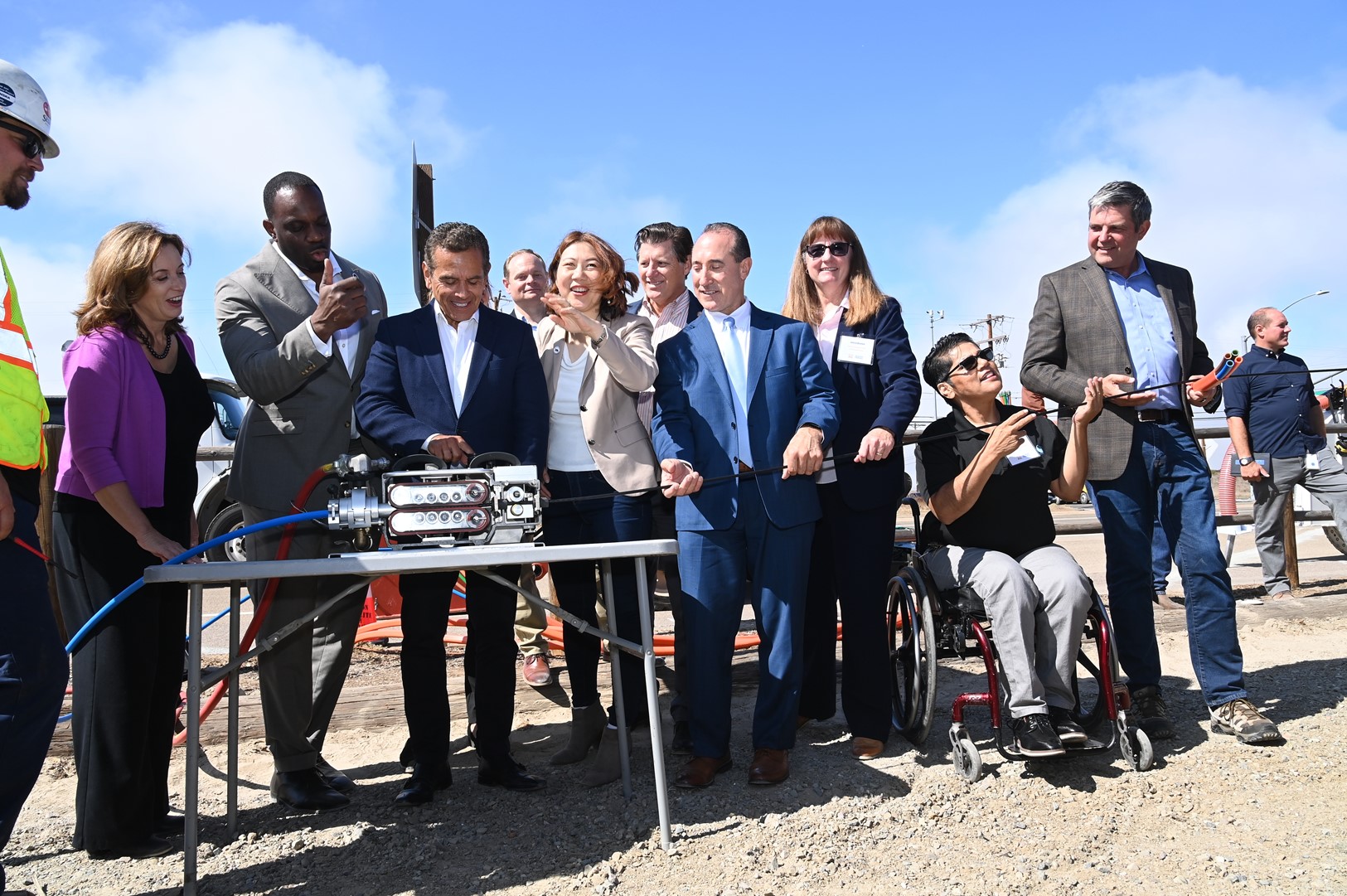 Construction began Thursday on State Route 67 near Poway in San Diego County, where Newsom Administration officials gathered as 500 feet of fiber optic cable was blown through conduit in the first segment of a massive, $3.8 billion statewide project known as the “Middle Mile” broadband network.

The planned network, which will be the nation’s largest, will cover the entire state to help bring reliable, high-speed internet access to the millions of Californians who do not have it now. Once complete, funding for “last mile” efforts will support internet connections from “middle mile” lines to homes and businesses, as well as efforts to ensure individuals can afford broadband service where it already exists.

Roughly one in five Californians do not have access to reliable and affordable high-speed internet.

Secretary of the California Transportation Agency Toks Omishakin, Secretary of Government Operations Amy Tong, and former Los Angeles Mayor Antonio Villaraigosa marked the occasion in Poway, at the site of a new fiber optic line that will run from Lakeside to Ramona.  More than 200,000 people in the San Diego area do not have broadband service.

“Beginning construction on the middle-mile network is a significant step toward broadband equity and providing all Californians the opportunity to access critical information. High-speed internet is much more than a connection – it’s a lifeline that families need to work, learn, and access critical services.”

“We are thrilled to see construction begin on the middle-mile network,” said Secretary Tong. “Too many rural and urban areas lack adequate broadband infrastructure, forcing residents to attempt to connect via mobile hotspots and unreliable satellite service, which leaves out too many Californians.”

Former Los Angeles Mayor Antonio Villaraigosa, who was named by the Governor in August to serve as Infrastructure Advisor to the State of California, joined the event Thursday to highlight the substantial federal resources coming to the state for infrastructure investments like broadband networks.

“This broadband network is one of the most ambitious and impactful infrastructure projects in California – and we’re thrilled that construction is underway starting today,” Mayor Villaraigosa said. “With billions more in federal infrastructure dollars on the way, we’re getting ready to celebrate many more groundbreakings for innovative projects across California. This goes far beyond infrastructure, this is about building the future of our state and creating thousands of good-paying jobs along the way.”

CDT Director Liana Bailey-Crimmins said construction on the first segment of the Middle Mile network follows more than a year of planning.

“The rapid planning by the Middle Mile team as well as our local partners is coming to fruition. It’s wonderful to see the hard work paying off, to make a difference in the lives of Californians who live in unserved areas like this one.”

Caltrans Director Tony Tavares said each of the Department’s 12 districts is working to build segments of the Middle Mile network on an ambitious timeline in the hope of capturing the maximum amount of federal funding available.

“This project provides a wonderful opportunity for us to ‘dig smart’ and highlights the benefits of coordination among state agencies and with our local partners. Caltrans is proud to partner with the Department of Technology to create a broadband Middle Mile network, providing equitable, high-speed broadband service to all Californians.”

Once the Middle Mile network is complete, local carriers will have access to the network to provide communities with direct service to homes and businesses as well as reduced-cost or free broadband internet service for those who are eligible.

Broadband access in California received a boost in federal funding in 2021 with the passage of the federal American Rescue Plan Act (ARPA) and the federal Infrastructure Investment and Jobs Act (IIJA), both aimed at helping the nation recover from the COVID-19 pandemic with wide-ranging infrastructure investments including affordable access to high-speed broadband for individuals, families and communities so they may work, learn and connect remotely.

Californians interested in seeing if they qualify for discounted high-speed internet services available now may learn more at the state’s Broadband for All website.

The design and construction of the middle mile network is overseen by the Middle Mile Advisory Committee (MMAC) with expertise from GoldenStateNet, the state’s consultant. For more information and interactive maps outlining the 10,000 mile system, please visit the Middle Mile Broadband Initiative website.