Caltrans needed only one month to repair a broken 50-foot section of the Bay Bridge.

The Cypress Street Viaduct failure, in a way, brought out the best in the department.

Near the epicenter, Caltrans crews dealt with landslides and cracks on State Route 17.

A State Route 1 bridge failed near Watsonville; columns punched through the surface.

The silver lining to 1989 tragedy is improved safety

Acting Director Bob Franzoia reflects on how Caltrans has made the state's transportation system safer based in part on lessons learned from four major earthquakes between 1971 and 1994, including Loma Prieta.

Thirty years ago, we answered the call

The Loma Prieta earthquake represents one of the biggest challenges that Caltrans has ever faced. Our department’s professionalism and grit were on full display in the days that followed.

Brian Maroney: 3 cheers for those who get it done

During Brian Maroney’s illustrious 36-year Caltrans career, his arrival at the Cypress structure the morning after it had collapsed remains a strikingly unique and moving experience.

Young associate bridge engineer Erol Kaslan was thrust into the chaotic quake aftermath at Cypress. That high-adrenaline experience made him reconsider his career path.

René Garcia: Technology is going to be our friend

A young man from a tiny town, René Garcia suddenly found himself doing emergency traffic-management work in a megalopolis. He kept his composure – and even saw the future.

Steve Whipple: 15 minutes of fame, and then some

Steve Whipple spent two weeks working 12-hour shifts at the Cypress collapse. But it was just one quiet, early morning moment that turned him into a globally interviewed expert.

Algerine McCray: CT reaches out to the community

When the Cypress Street Viaduct was built, Oakland residents were not consulted. When Loma Prieta brought the structure down, Algerine McCray got an earful from the citizenry.

Matt Harizal: Forced to cope with a horrific scene

Confronted by the Cypress structure collapse, Matt Harizal kept it together emotionally and did his job. However, ‘I just broke down crying when I got home. Those people had families, right?"

Jack Broadbent: Got to find a way home

His work done for the day, Jack Broadbent was about to head over to the East Bay when Loma Prieta knocked the Bay Bridge out of commission. Let the commuter adventures begin!

Paul Lukkarila: You're mad, but I might be right

Paul Lukkarila was 24 years old and had been a full-time Caltrans assistant engineer for less than three months when the earthquake hit and he was placed in a position of authority.

Reporters phoned Jim Drago practically 24/7 in the early days after Loma Prieta. What they got was a passionate defender of the department who still sees Caltrans’ role then as "heroic."

In late October 1989, a handful of Caltrans employees set out to interview as many colleagues as possible about their earthquake experiences. We present a few of the livelier excerpts.

For individuals with sensory disabilities, this document will be made available in Braille, large print, on audiocassette, or on computer disk. To obtain a copy in one of the alternative formats, please contact the editor.

The 1989 Loma Prieta earthquake in photographs 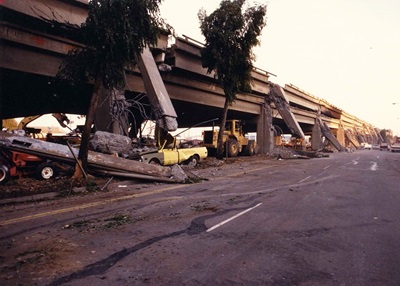 The Cypress Street Viaduct, part of Interstate 880, mostly collapsed between 16th Street and the MacArthur Maze in Oakland as a result of the Oct. 17, 1989, Loma Prieta earthquake. (All photographs are from Caltrans archives) See the full gallery.