For more information about the July 27, 2022 Public Hearing, please click the link below:

The California Department of Transportation (Caltrans) proposes to widen the south side of State Route 180 by 15 feet and install a two-way left-turn lane in the center of the roadway. The project lies in Squaw Valley in Fresno County between the Mountain Valley Community Church and Elwood Road. Other work would include upgrading drainage systems through the project limits, repaving existing driveway connections to the southern side of State Route 180, and installing a traffic monitoring station system. Oak tree and vegetation removal would be required, and construction would occur at night. The project would occur within the existing right-of-way. 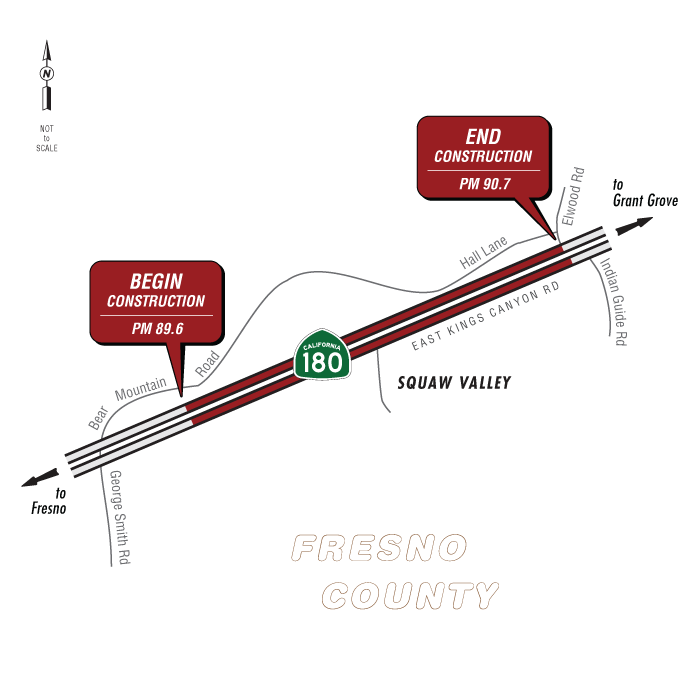 The purpose of the project is to improve safety and reduce collisions on State Route 180 in Squaw Valley.

The collision rates for the most recent three-year period (January 1, 2017, to December 31, 2019) for this section of State Route 180 are shown in Table 1 below: In Table 1, total collisions mean the total number of collisions that did not result in injuries or fatalities.

The actual fatal, fatal and injury, and total collision rates for similar roadways with comparable traffic volumes are higher than the statewide average. The performance objective of this project is to reduce the severity and number of collisions for the life of the project. The project would achieve this objective by reducing the number of collisions by 20 over the next 20 years.

The proposed two-way left-turn lane would be a continuous turn lane located in the central business corridor of Squaw Valley that would create a refuge lane for vehicles and reduce the number of conflict points for potential collisions.

Rear-end collisions would be reduced because turning vehicles would use the two-way left-turn lane to get out of the way of through traffic. The area where the two-way left-turn lane is proposed has many establishments along State Route 180 that are accessed by the driveway. Currently, when motorists on State Route 180 need to make a left turn to enter the driveway of their destination, they may have to wait in the through lane for oncoming traffic to clear before proceeding to make their left turn. While waiting for oncoming traffic to clear, these motorists may be susceptible to rear-end collisions from motorists approaching from behind. The two-way left-turn lane is intended to provide a lane that separates left-turning vehicles from vehicles traveling on the through lane, thus eliminating the potential for same-direction traffic conflicts.