The California Department of Transportation (Caltrans) proposes to rehabilitate State Route 184 between post mile 0.8, near Dunnsmere Street, and post mile 8.6 at Breckenridge Road in Kern County. The project would provide 8-foot-wide shoulders along the length of the project in both directions. Guardrail would be installed in both directions at the Eastside Canal. Three drainage basins and storage ditches would be constructed to address existing areas prone to flooding. The project consists of Complete Streets elements, such as upgrading existing non-standard curb ramps, sidewalks, and driveways where required within the Caltrans right-of-way. Pedestrian crossings and Americans with Disabilities Act (ADA) upgrades would be made at two railroad crossings (Di Giorgio Avenue and Edison Highway). Class 2 bike lanes would be installed in both directions. Traffic signal modifications and/or upgrades would be made at several intersections. Pre-signals for the railroad crossings and other electrical items may be installed or upgraded throughout the project limits. These would include traffic loop detectors, pull-boxes, demarcation cabinets, park and ride lighting, and vehicle detection systems. Raised median curbs would be added at nine locations to improve safety for motorists making turns. 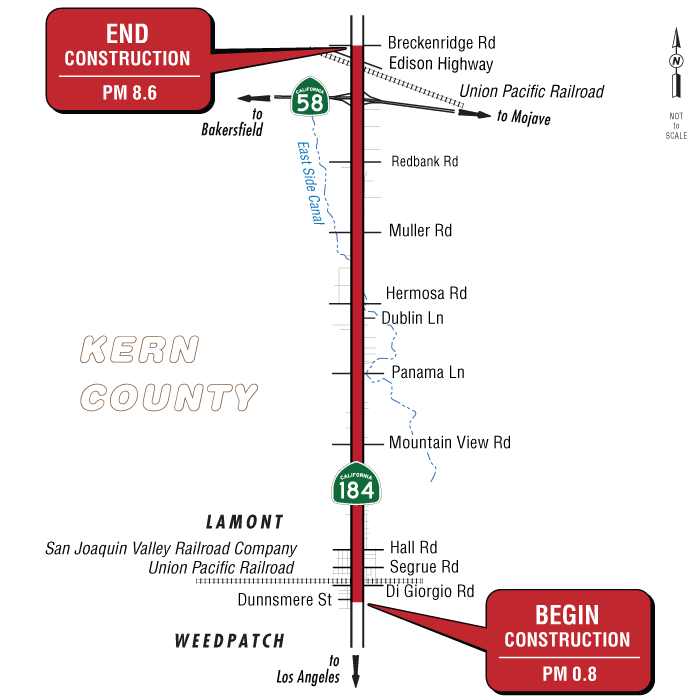 The purpose of this project is to restore the facility to a state of good repair so that the roadway is in a condition that only requires minimal maintenance expenditures. The project would replace and upgrade other highway elements within the project limits that are failing, worn out, or functionally obsolete.

The frequency of repairs required is surpassing the availability of State maintenance forces and has resulted in increased costs of maintaining State Route 184 within the project limits. The Pavement Condition Survey characterizes the road as having mild pavement distress. At various locations, the existing shoulder widths are not to current standards. Also, existing sidewalks and curb ramps are not to current standards. Pedestrian and bicyclist accessibility are not continuous within the project limits.