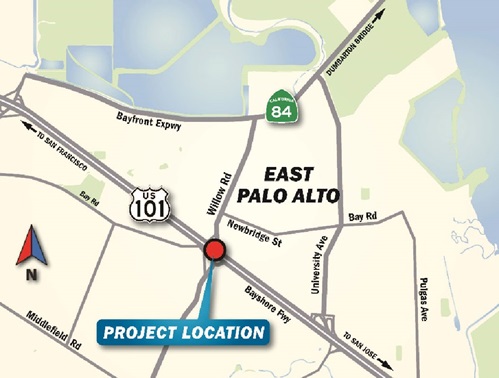 (This Project Has been Completed)

The original interchange, a cloverleaf, was built in 1955 and served traffic well for decades. But cloverleaf interchanges, once the paragon of efficiency for moving traffic and conserving land, cannot handle modern traffic volumes, at least not at most locations in the Bay Area.

Why is that? Traffic on cloverleaves bunches up on the overpasses and the freeway underpasses, the places where the “leaves” connect to the “stems.” Look at the diagram on the right. The weaving areas, the light gray area on the overpass (left) and the freeway below it, are very short, forcing driving to accelerate or decelerate, step on the gas to zip ahead of traffic or hit the brakes to allow traffic to weave in. Weaving in such a short section on roadway requires a lot of vigilance. On busy days, it can be particularly difficult. Also, the size of the interchange is relatively small and compact, which may have been a good thing in decades past as it preserved land for other uses. Nowadays with so much additional traffic traveling through the interchange the small size creates congestion.

The exiting Willow Road Interchange is full cloverleaf interchange. To solve the weaving problem, the Willow Road interchange will be updated to a half cloverleaf, (see below) where only half as many of the ramps connect to the overpass or underpass, reducing congestion and easing the strain on motorists by providing much more room to merge. 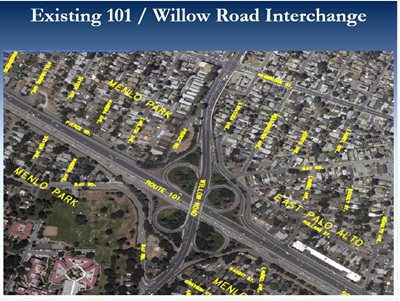 The Willow Road Overpass project provides an opportunity to build features for bike riders and pedestrians. The new overpass will have sidewalks and two bicycle lanes in each directions. One bicycle lane, meant for casual cyclists, will be separated from traffic with a barrier, while another lane, meant for faster cyclists, will have a designated lane in the traffic lanes. 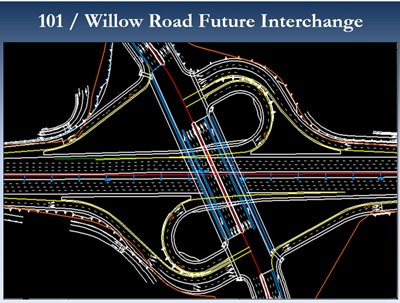