It's not often that Caltrans advertises for a shepherd. But shepherds and their flocks may play a larger part in the district’s vegetation management program as it seeks eco-friendly ways of controlling highway brush.

Caltrans typically employs goats, not sheep, as goats eat “high and low,” meaning that they graze along the ground, but also reach into the trees and bushes for various things edible.

The goats, 400 of them, arrived on Tuesday, July 27, 2020, on a mission to devour shrubs and weeds along a two-mile stretch of north- and southbound Highway 101 between Healdsburg and Geyserville. The goats would create a firebreak by doing what they do best – eating almost everything within reach. 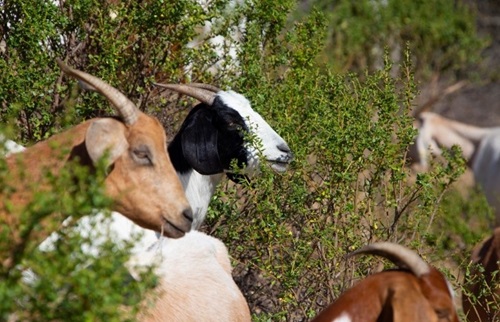 The ad hoc partnership sought an eco-friendly means of creating a firebreak along the freeway. The North Bay has recently suffered some of the worst wildfires in state history. The partners wanted the goats onsite before the summer heat turned the vegetation brown, dry, and flammable.

"Sonoma County has gone through hell and back with recent wildland fires, and now, emergency preparedness and prevention has become a part of our daily lives," said Senator Mike McGuire. "It may sound funny, but goats are some of the most effective partners we have at reducing fire load."

Sonoma County has an ordinance against government use of glyphosate, aka Roundup, for weed control.  As a state agency, Caltrans is not bound by the regulation and still uses glyphosate when necessary. But the district always looks for alternatives.

Goats feed "high and low," devouring grass near the ground and standing on their hind legs to reach leaves on bushes and trees. 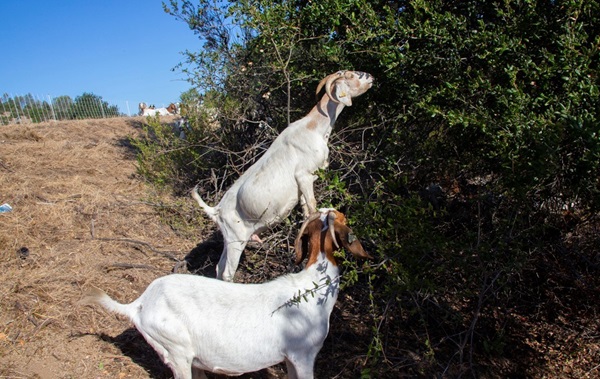 John Quinn, owner, manager, and oft-times shepherd of Capra Environmental Services, says that vegetation control by goats has advantages over herbicides that go beyond the typical drawbacks of chemical use.

"Goats will get rid of the stuff that herbicide leaves behind," said Quinn. "When they stand on their hind feet, goats can reach high into the brush, eating leaves six-feet off the ground. A worker with a weed whip or driving a spray truck could never reach areas that goats can reach.

Also, mowing and spraying leave behind flammable debris, including cut grass and dead weeds. And what do goats leave behind? "Only pellets on the ground," says Quinn. "There’s nothing left to burn.”

North Bay maintenance supervisor, Chad Klein, did the math before the goats' arrival. “A 400-head goat herd can clear an acre to an acre-and-a-half of brush per day,” he said. “They will stay until they have eaten everything they can reach, probably 12-16 days on each side of the highway.” Klein proved to be accurate. The goats were gone in less than 30 days.

Capra Environmental manages about 4000 animals, mostly goats, but there’s some sheep in the mix, along with herding and guard dogs. Business has been good lately. “Counties, municipalities, and the state have been seeking ways of reducing their herbicide spraying,” said Quinn. “Businesses and individuals are also trying to reduce spraying.” 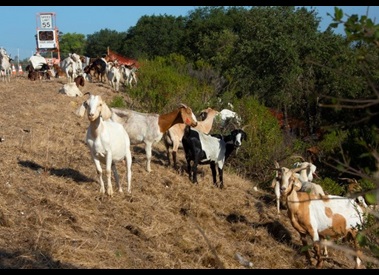 “The hardest part of the job,” said Quinn, “is setting up the fences or getting water for the herd.” Before the goats enter an area, work crews install temporary electric fences to keep the goats from escaping and to keep out predators. Since most sites aren’t located within reach of potable water, Quinn needs to deliver it, often in a tanker truck, especially if the weather is hot and the herd is large.

Quinn uses Border Collies for herding and Anatolian Shepherds for protection against predators or nuisances. The shepherding dogs protect against coyotes, bobcats, mountain lions, and in some locations, bears. They also run off other dogs that can also be a nuisance to the goats.

A typical goat may have visited 40-50 locations, so the animals have been acclimated to many situations. The goats don’t spook easily, including at the shepherding dogs.  Unless there’s a threat to a goat, they are gentle, calm creatures.

If you look at areas where goats have grazed, you realize there’s not much that goats won’t eat. Ragweed, mulberry, horseweed, even thorny vines like blackberry are fodder for them. They roam carefree through thickets of poison oak, which they also eat, especially when the leaves are still green. Unfortunately, the oil tends to collect on their fur, a professional problem for the shepherd during the herding months.

“I have a recurring case of poison oak from April to November,” said John Quinn.

The district has used brush-clearing goats in years past at the east side of the Caldecott Tunnel and, most recently, near the anchorage of the Bay Bridge in San Francisco. Goats are agile climbers and they maneuvered effortlessly over the rocky, steep terrain next to the bridge, stopping to graze on grass and weeds as they worked their way up and down the slope.

When the goats finish their work at a site, Quinn loads these them into their livestock trucks, electric fences are removed, rolled and readied, and they head to new pastures, leaving little trace, no environmental damage, and an area that is far more secure from fire.

Back to the Forward