MARIN COUNTY — Caltrans is continuing the Harbor Bridge Replacement Project in September and October for pavement and electrical work on the northbound 101 off-ramp to Central San Rafael. The project started in February 2021, and on Dec. 11, 2021, was suspended due to environmental regulations for in-creek work.

There is a full off-ramp closure of the Central San Rafael exit on US-101 northbound on Tuesday, September 27, and Thursday, September 29, from 11 p.m. until 7 a.m. each day due to drainage and curb ramp work.

The work was originally slated for the week of September 19 but had to be rescheduled due to a lack of resources. 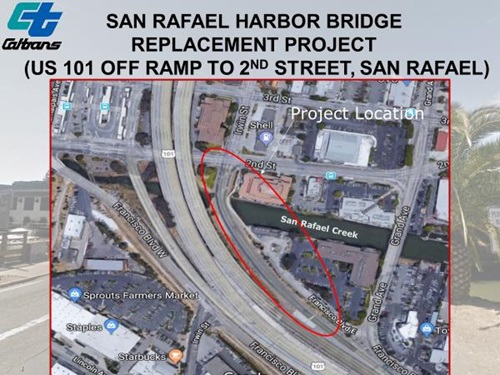 A lane closure is scheduled from Monday, September 26 until Friday September 30 from 9 p.m. until 7 a.m. each day. Upon exiting the Central San Rafael off-ramp, one lane (out of three) will be closed during construction; the other two lanes will remain open at all times.

Changeable message and directional signs will be in place to assist motorists traveling in the area. The California Highway Patrol (CHP) will be on-site during the closures.

Please drive with caution. Slow for the Cone Zone and Be Work Zone Alert. Caltrans thanks motorists for their patience while we work to maintain our state's highways, bridges, and tunnels.