from Posey and Webster Tubes During Maintenance Work

Alameda County — Caltrans will temporarily restrict large vehicles during maintenance work on the Posey and Webster Tubes. Vehicles with three or more axles will be detoured when traveling through the tubes (State Route 61) between the cities of Alameda and Oakland effective tomorrow, Wednesday, April 15.

The restriction does not apply to cars, SUVs, and small trucks driven by the average motorist, nor does it apply to buses or emergency vehicles. Transport of flammables, combustibles and explosives will also be prohibited from the tubes.

These restrictions will be in effect 24 hours a day until further notice in both tubes, and law enforcement will enforce the restrictions.

Detours will add about four miles and 10 – 25 minutes to a driver’s trip. Directional signs will help direct

From Oakland — Southbound restricted traffic travels south along I-880 and cross the Oakland Estuary via the Park Street Bridge.

From Alameda — Northbound restricted traffic travels east to Atlantic Avenue and then crosses over the estuary at the Park Street Bridge.

Here is a map showing the detour plans within Oakland and Alameda: 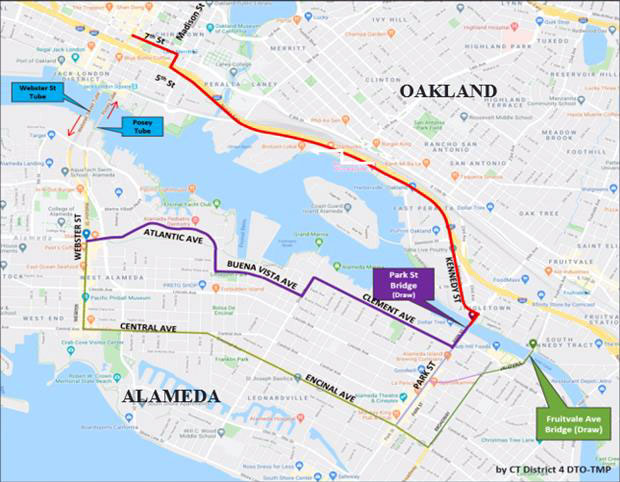 Vehicles with three or more axles are advised to expect delays and allow extra time. Please drive with caution. Slow for the Cone Zone and Be Work Zone Alert. Caltrans thanks motorists for their patience while we work to maintain our state’s highways, bridges, and tunnels.