Petaluma, Sonoma County - As part of the project to widen Highway 101 in Petaluma, Caltrans will close the bicycle/pedestrian path, also known as the multi-use path, between Payran Street and Southpoint Boulevard in mid-April 2020 until project completion at the end of 2023. The closure of the path will allow Caltrans to safely demolish and rebuild the Petaluma overcrossing, which passes over the multi-use path and the SMART railroad tracks. The new overcrossing will be wider, six lanes instead of four, the difference being the addition of two new carpool lanes – one in each direction, part of the plan to reduce congestion in the corridor.  The closure will only affect the path, there will be no impacts to passenger rail service.

Cyclists and pedestrians may travel as far as the Highway 101 overpass before reaching a full-closure where they must turnaround. For through-traffic, Caltrans has marked and signed detours for northbound and southbound path-users at Payran Street and Southpoint Boulevard. The detour for the path may be familiar to cyclists and pedestrians, as it was the bike/ped route before the opening of the current path, in October 2019. 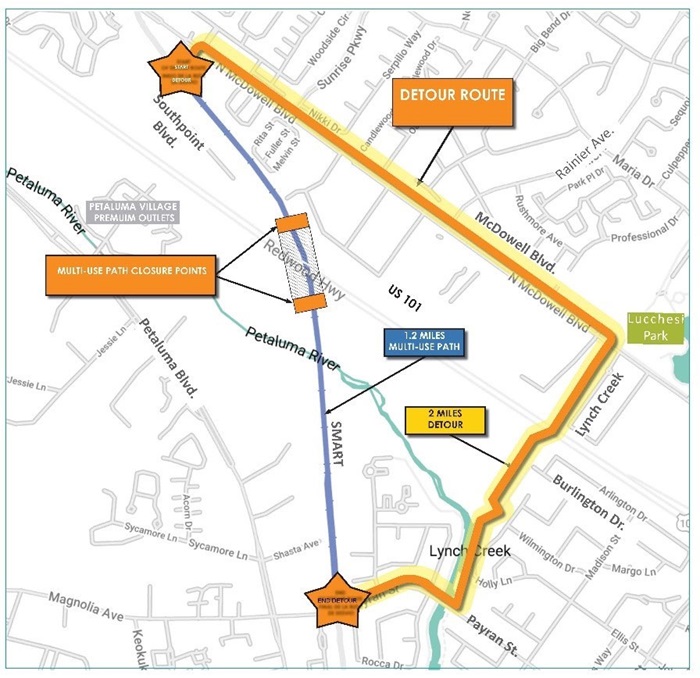 Caltrans has partnered with the Sonoma County Transportation Authority and the City of Petaluma to add a carpool lane in each direction of Highway 101 in Petaluma between Lakeville Highway (Route 116) and Corona Road. Upon completion, Highway 101 will be three lanes in each direction, including new northbound and southbound carpool lanes. Soundwalls will be added in many locations. Caltrans will also construct a new overcrossing at Rainier Avenue.

Ghilotti Construction is the contractor on the $78 million project.

The Petaluma project is part of the larger Marin-Sonoma Narrows (MSN) project, a series of 13 projects to widen Highway 101 by adding a carpool lane in each direction. The Marin-Sonoma Narrows project extends 16-miles from State Route 37 in Marin County to Corona Road in Petaluma.

The current project is the final MSN project in Sonoma County. The two remaining MSN projects, both in Marin County, will begin when funding becomes available.

For more information on this project go to  http://bit.ly/101wideningpetaluma