from Whipple Avenue to I-380

San Mateo - Caltrans, in coordination with the San Mateo County Transportation Authority (SMCTA) and the City/County Association of Governments of San Mateo County (C/CAG), will start the second phase of the San Mateo 101 Express Lanes Project on February 11, 2020. The project will add an express lane in each direction of U.S. 101 between Whipple Avenue in Redwood City to just north of Interstate 380 in South San Francisco.

During the first phase of the project, which began in March 2019, Caltrans modified the freeway median and installed toll system signage between the Santa Clara County line and Whipple Avenue. 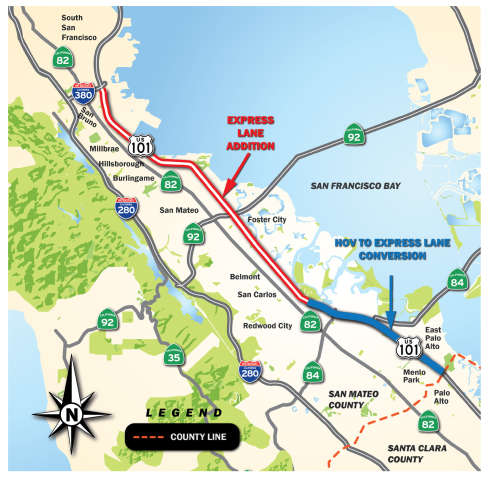 Whipple Avenue. In total, this will create a new 22-mile express lane in each direction. It will also seamlessly connect with an express lane being constructed in Santa Clara County.

During the hours of operation, the new express lanes will help make this congested corridor more efficient, these lanes are planned to enable traffic to travel at speeds of 45 miles an hour or greater, which will encourage carpooling and transit use, reduce travel times, improve reliability, and increase the total number of people moved through the corridor.

“The San Mateo County 101 Express Lanes Project will transform the Peninsula by adding express lanes in both directions while keeping the same number of existing through lanes,” said San Mateo County Express Lanes Joint Powers Authority (SMCEL JPA) Board Chair Alicia Aguirre. “By providing reduced and reliable travel times in these express lanes, travelers will be incentivized to carpool and use express buses, resulting in overall congestion reduction of the corridor.”
These express lanes are governed by the SMCEL JPA, a six member joint powers authority consisting of three SMCTA Board members and three C/CAG Board members. This Board is tasked with making policy decisions about the management of the SM 101 Express Lanes Project. Travelers will be able to see real-time traffic conditions from changeable message signs placed in the construction zone. This Smart Traffic System is being implemented during construction to provide up to date information, improve safety, and reduce congestion.