On Northbound Hwy 101 in Sonoma County

By opening a third lane on a Petaluma bridge and converting mixed-flow lanes into HOV lanes, Caltrans will bridge the gaps in the carpool lanes between the Marin County border and downtown Windsor, creating a 30-mile stretch of carpool lane for motorists on northbound Highway 101 in Sonoma County.

The milestone will be reached in the early morning hours of Thursday, December 2, 2021, when Caltrans, working on the Petaluma Widening Project, completes the northbound widening on the Washington Creek Bridge between Lakeville Highway (State Route 116) and the Lynch Creek Trail bridge just north of the E. Washington Street interchange. 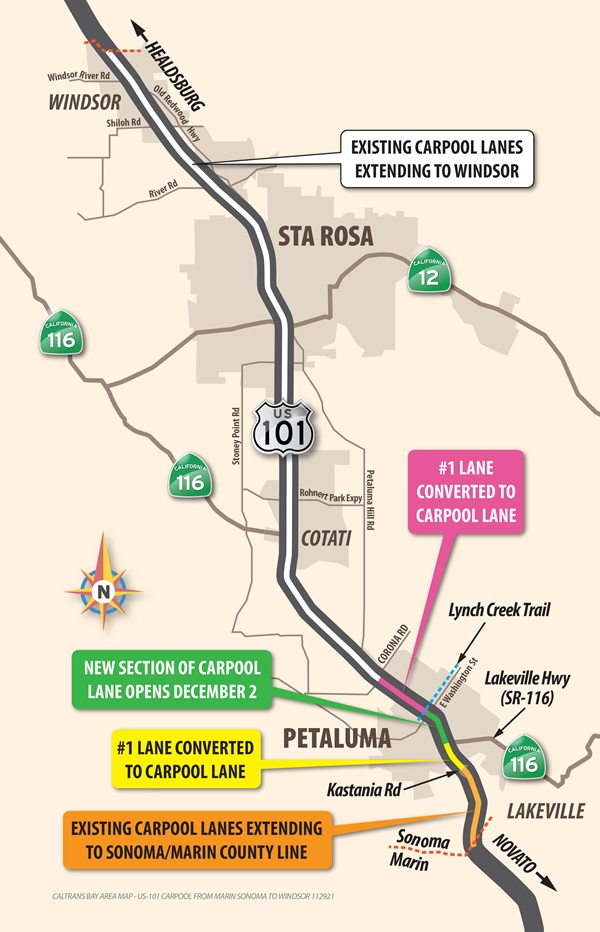 The newly widened Washington Creek Bridge is the last piece needed to complete an uninterrupted three-lane freeway on northbound Highway 101 between the Marin County Line and Windsor.

As per plan, the fast lane of recently widened Highway 101 – Kanstania Road to Lakeville Highway and Lynch Creek Trail Bridge to Corona Road – will be re-striped to convert the fast lane into a carpool lane.

Still, the 30-mile carpool lane is a major boost for northbound motorists who will experience fewer merges and considerably less congestion.

Also, the new carpool lane represents half of the project’s primary objective, namely, adding a carpool lane to each direction of Highway 101 in Petaluma and connecting it to existing HOV lanes to the north and south,

The Petaluma Widening Project is one of 13 projects of the larger Marin/Sonoma Narrows widening project to add a carpool lane in each direction of Highway 101 between State Route 37 in Marin County and Corona Road in northern Petaluma.

Only two roadway projects remain on the Marin-Sonoma Narrows, including the Petaluma Widening Project, which is underway.

The final project will begin in spring 2022, which will add carpool lanes between Novato and the Marin/Sonoma county border.