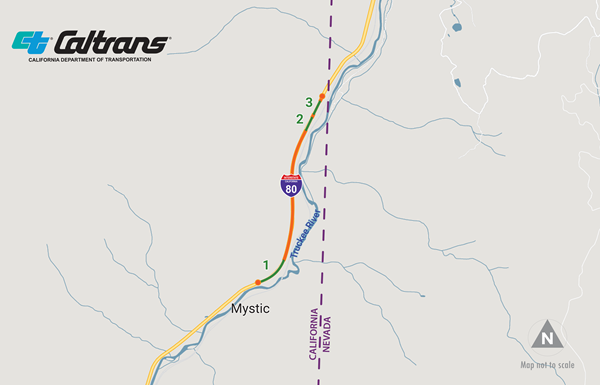 Sierra/Nevada Counties – Caltrans is alerting Interstate 80 (I-80) east- and westbound motorists to expect rolling traffic breaks at various locations beginning next week near the California-Nevada border for mountain slope work.

A contractor will be utilizing a helicopter to fly anchors, drilling equipment and other supplies to the top of the mountainside near Mystic and the state line. Crews will then use the equipment to drill and place anchors into the slope as a base for wire mesh drapery systems.

The California Highway Patrol (CHP) will perform rolling traffic holds along east- and westbound I-80 during the helicopter work. Traffic will be held in both directions for approximately 10 minutes before being released. Motorists should expect travel delays of 30 minutes due to queuing during traffic holds.

Helicopter work and rolling traffic breaks on I-80 are currently scheduled between 10 a.m. and noon on the below dates. The construction schedule is subject to change based on weather, equipment and CHP availability or other unexpected events.

The improvements are part of a $12.6 million project to stabilize the cut slope along I-80 westbound just west of the California-Nevada line to prevent continued rockfall onto shoulder areas and the roadway. The project will include flattening existing slope, installing drapery systems, and constructing concrete barriers and valley gutters.

Alfaro Communications Construction, Inc. of Compton is the prime contractor for the project, which is scheduled to be completed in November 2022.