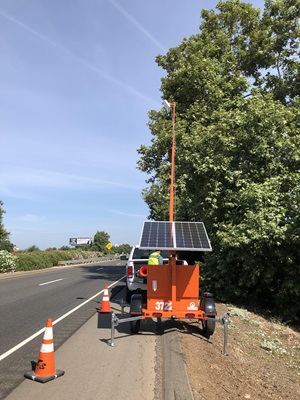 The messaging systems will increase motorist awareness and safety in areas that have seen a significant increase in traffic during Camp Fire recovery efforts in Butte County. The PCMS and Ver-Mac SpeedMac systems monitor traffic speeds and flash messages alerting motorists to slowed or stopped traffic ahead, giving them time to reduce speeds. The contract for the technology was awarded to Capitol Barricade and Ver-Mac under emergency recovery funding.

“We are thankful for the dedicated efforts of crews that are assisting with debris removal and Camp Fire recovery in Paradise and Butte County,” said Caltrans District 3 Director Amarjeet S. Benipal. “These message boards are another tool Caltrans is implementing to keep motorists safe on local highways and increase awareness of traffic flow during recovery efforts. We continue to encourage motorists to be alert and pay attention to all posted traffic speeds and message signs on the highway.”

The Ver-Mac SpeedMac system uses a microwave sensor that recognizes vehicle type, volume and speed on all northbound lanes of traffic. Once traffic speeds dip below 45 mph or 30 mph, unique messaging is sent to PCMS boards farther south alerting motorists to reduce speed or prepare to stop due to slow-moving traffic ahead.

In addition to the new PCMS boards and sensors on Highway 99, Caltrans also installed a roundabout at State Route 191 and Durham Pentz Road to keep vehicle traffic moving during debris-hauling activities. Additional speed-feedback radar signs have been installed to remind motorists of the 20 mph speed limit in the roundabout. Caltrans will also be adding in-ground rumble strips before the roundabout and raised pavement markers (Botts’ dots) on the chevron striping inside the roundabout as an additional alert to reduce speed.

Caltrans District 3 maintains more than 4,385 lanes miles of state highway in 11 Sacramento Valley and Northern Sierra counties. The department issues updates about road conditions on Twitter and on Facebook. For real-time traffic information, go to QuickMap or download the free Caltrans QuickMap app from the App Store or Google Play.