Caltrans is partnering with CAL FIRE and other agencies to identify multiple areas with historic wildfire risks and are working to reduce those risks through vegetation management and fuel reduction. It’s in response to increased catastrophic wildfire activity across California and other states in recent years. 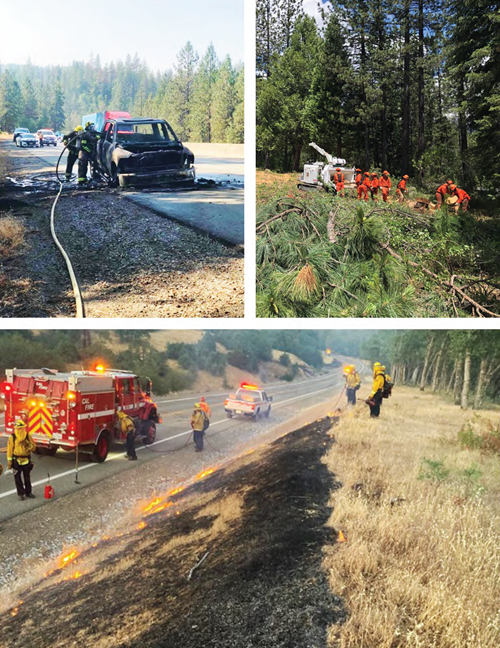 Caltrans maintenance crews are working in various areas across District 2 to create defensible space within and alongside highways to help reduce wildfire risks. Crews are mowing and applying approved herbicides where allowed, even employing hand work as needed in order to accomplish this task and to create fuel breaks to preserve emergency evacuation routes.

One of those locations is the Cottonwood Grade between Cottonwood and Anderson. Caltrans District 2 is working with CAL FIRE and the Western Shasta Resource Conservation District to conduct prescribed burns to clean up 17 acres of vegetation off shoulder areas and reduce ladder fuels, which if left untreated, can allow a fire to ignite and climb up from the landscape or forest floor into a tree.

“These approaches allow us to clean-up fire fuels in an efficient and preemptive manner in areas where we know there’s a historic potential for fires,” Tom March said. “Cottonwood Grade, for example, has been burned 54 times in 10 years.”

March said the process of working with other agencies to remove these fuels has been very beneficial for the betterment of the traveling public and first responders. And while nobody can prevent fires, Caltrans and CAL FIRE can try to reduce the risk by removing fuels.

“It’s an efficient use of taxpayer dollars that greatly benefits the traveling public, property owners and the environment,” March added.