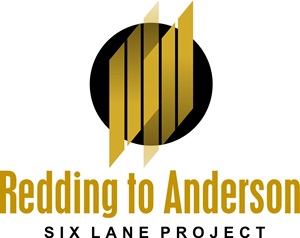 REDDING – Caltrans today announced that the $132 million Redding to Anderson Six Lane Project on Interstate 5 in Shasta County has entered its final year of construction due in part to $88 million in funding from Senate Bill (SB) 1, the Road Repair and Accountability Act of 2017. Started in January of 2019, the project is relieving corridor congestion and improving the movement of goods and travelers on Interstate 5 between Redding and Anderson in Northern California. The project is currently scheduled for completion by early winter of this year.

“Interstate 5 in Northern California represents an essential corridor that serves commuters, tourists, and commercial transportation,” says Caltrans Director Toks Omishakin. “This project in Shasta County is a significant investment toward upgrading our state’s aging infrastructure and supporting the efficient and timely movement of goods and individuals throughout the region.”

The project is adding an additional lane in both the northbound and southbound directions on Interstate 5 from near the Deschutes Road interchange to just south of the South Bonnyview/Churn Creek Road interchange, making it a continuous six-lane facility. Other improvements include rehabilitating the existing pavement, installing new median barriers, guardrail and overhead signs, upgrading lighting, and lengthening on-ramps and off-ramps.

The project is also widening eight bridge structures in the area and replacing the Anderson Creek Bridge and the South Anderson Railroad Overhead.

“The Redding to Anderson Six Lane Project is a great benefit to our area,” says District 2 Director Dave Moore. “The addition of the extra lane of interstate in both directions not only benefits local travel in and around Anderson and Redding, but also provides more capacity for freight and through traffic. We are excited to be in the home stretch of the project and appreciate the continued patience of the traveling public and area residents.”

A 55 mph speed limit remains in place on the south end of the project. Motorists are reminded to slow down, abide the speed limit, and follow Caltrans District 2 on our Facebook and Twitter pages for project updates. The public can also call (530) 225-3426 during working hours or send an email to D2PIO@dot.ca.gov with questions.

SB 1 provides $5 billion in transportation funding annually split between the state and local agencies. Road projects progress through construction phases more quickly based on the availability of SB 1 funds, including projects that are partially funded by SB 1. For more information about other transportation projects funded by SB 1, visit Rebuilding California.