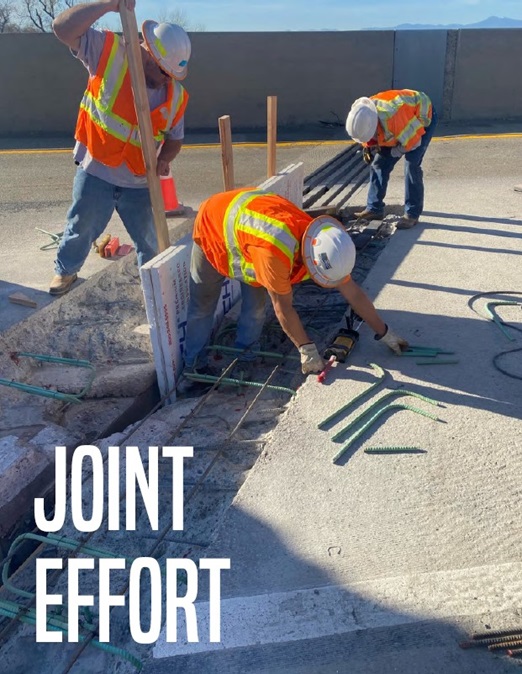 In recent months, Caltrans Maintenance and Construction have been conducting emergency joint repairs on the Cottonwood Creek Bridge on Interstate 5 near Cottonwood. A section of the bridge joints near the south end of the bridge were found to have failed, causing the fracturing of the joint beams across the entirety of the lanes. The steel bridge joints have a life span of approximately 25 years, with 2021 being year 22 of that.

District 2 Maintenance, headed by the Bridge Crew, began temporary emergency repairs on the northbound sections of the bridge joint in late October. Crews were notified when the bridge joint was an immediate traffic and safety issue and the pertaining areas were shut down as necessary.These temporary repairs were done on an as-needed basis, including an approximately 60-hour closure of the northbound #2 lane section from December 3 - 6. 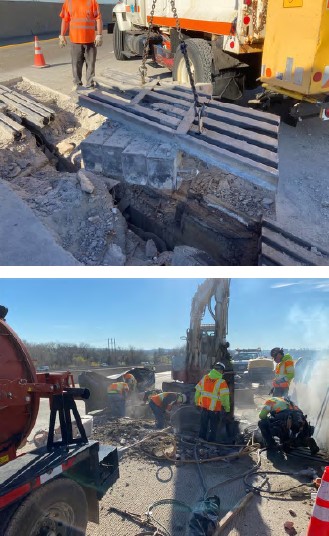 Upon the completion of the Director’s Order, North Region Construction and contractor Golden State Bridge, Inc. took over emergency repair duties. Immediate attention was placed on the hinge joint under and near the northbound #1 lane.

On December 14, crews performed grinding work and laid polyester concrete in the area to help smooth out the profile around the joint. On December 17, repair and replacement of the northbound hinge joint and assembly was performed. Crews were able to utilize these two days between inclement weather to make critical repairs as quickly as possible.

Continuing work on the structure is planned in the near future, with bridge joint repairs remaining at the southbound #1, #2, and northbound #2 sections. Caltrans continues to work with associated agencies and the traveling public to best notify and alleviate traffic congestion caused by the emergency repairs and lane reductions. Night work is being considered in the future as well, when applicable to operations.

Emergency efforts have been conducted for one lane at a time, depending on critical status of the bridge joint assembly. Due to the traffic volumes on Interstate 5, even a lane reduction in one direction on the freeway can cause significant traffic delays, with queues stretching for miles. The alternative to this work would be to remove traffic completely from the structure, depending on the critical status of the bridge joint assembly.

Big kudos to District 2 Maintenance, North Region Construction, and all other personnel involved for the team effort at the Cottonwood Creek Bridge. The section of I-5 in this area has no feasible highway alternatives for travel. The ability to make critical repairs and keep traffic moving on the interstate in the area at the same time is no small feat.