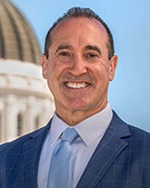 Director Tavares’ transportation vision for California addresses critical climate issues and advances a safe, equitable, accessible, sustainable, and multimodal transportation system that builds on strong partnerships and robust stakeholder engagement. He fosters a people-first culture built on the principles of Safety, Equity, Climate Action, and Economic Prosperity -- furthering a California for all. He encourages innovation and intelligent risk-taking, as transformative innovation will be needed to achieve zero traffic-related deaths and serious injuries by 2050 and reduce greenhouse gases (GHGs) by 40% by 2030.

Director Tavares most recently served as Director of Caltrans District 7, which encompasses expansive Los Angeles and Ventura counties. As District 7 Director, he oversaw transportation systems in a dynamic region that boasts 25% of California’s population; an annual construction program of more than $2 billion; and some of the most innovative solutions to help move people and goods through Southern California, part of the 5th largest economy in the world.

From 2010 to 2018, Director Tavares served as the statewide Division Chief for Maintenance. There, he directed 7,000 multi-disciplinary professional employees with an annual budget allocation of almost $2.2 billion. In the first year of SB1, he also delivered over $1 billion in pavement, bridge and culvert projects.

Director Tavares has also held executive leadership roles at Caltrans as the Division Chief for Right of Way and Land Surveys; North Region Deputy Director for Structure Construction; Deputy Division Chief for Construction; and District 10 Director. In 2013, Director Tavares was awarded the Pavement Pioneer Award from the National Asphalt Pavement Association for his contribution in perpetual pavement projects.

Tavares is a graduate of University of California, Davis, with a Bachelor of Science degree in Civil Engineering. He is a Professional Engineer (PE) and a certified Project Management Professional (PMP).