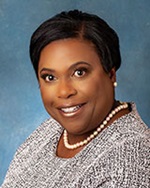 Velessata Kelley was appointed the Chief of Staff to the Director effective Monday, May 3, 2021. Velessata has served 31 years in the State of California serving 17 years with the Employment Development Department (EDD), and six and a half years with the California Public Employees Retirement System (CalPERS) and prior to joining the Department of Transportation (Caltrans) in 2013.

Velessata joined Caltrans team by accepting the position of Office Chief for the Office of Outdoor Advertising (ODA). In this capacity, Velessata was instrumental in leading department efforts to negotiate settlements for highway projects impacting outdoor advertising displays, and in successfully prosecuting industry violations. Prior to Caltrans, Velessata served as CalPERS’ Legislative Coordinator in the Office of Governmental Affairs.

EDD is where Velessata spent most of her state service, first serving in the Unemployment Insurance and Employment Services programs, and the latter half serving in the Marketing and Constituent Services, Legislative Affairs, and Communication offices. As a Legislative Analyst, Velessata also served part-time as staff to the Davis Administration’s Office of Senate, Labor Relations and Appointments, assisting various legislative deputies and senior staff.

In 2017, Velessata served as the Acting Chief of Staff in the Director’s Office for several months before returning to ODA. In 2020, Velessata was assigned as Office Chief for the Office of Professional Development in the Division of Traffic Operations.